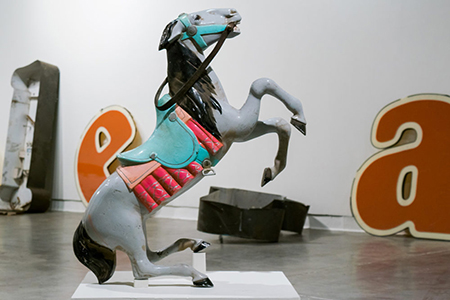 An exhibition of writings — not drawings or paintings that include words — but actual writings such as fairy tales takes ingenuity. This venue is up to the task. As artist-in-residence here for nearly a year, author Sarah Rafael Garcia has completed a book of six fairy tales, titled “SanTana’s Fairy Tales.” It is based on memories of her childhood in Santa Ana, the Orange County Mexican American community that has been undergoing gentrification. The venue hosting her residency and this exhibition is in Santa Ana, and the book, inspired by Grimm’s Fairy Tales, presents stories of longing, loss, community support and hope, among other themes. Each chapter heading is deftly illustrated in the spirit of the Grimm books.

This show contains three main components, and each demands time and patience to fully comprehend. Near the entrance is an oversized version of the book, printed on archived paper that can be read through. The six chapters takes us back more than thirty years, to the writer’s childhood in the multi-cultural enclave with its inherent pleasures and pathos. There are large reproductions of the six illustrated chapter headers on the walls, alongside a passage from each chapter. The centerpiece of the show is an installation composed of vintage carousel parts, retrieved from storage, including a colorful horse and large art deco style letters. These allude to the poignant story, “The Carousel’s Lullaby,” which includes the rhetorical question, “Don’t you want to know what happened to the Carousel?” While this question is not answered in the show or in the story, the actual carousel of the title was stationed in front of the classic neighborhood Yost Theater for more than two decades. It was taken down in 2011 due to gentrification.