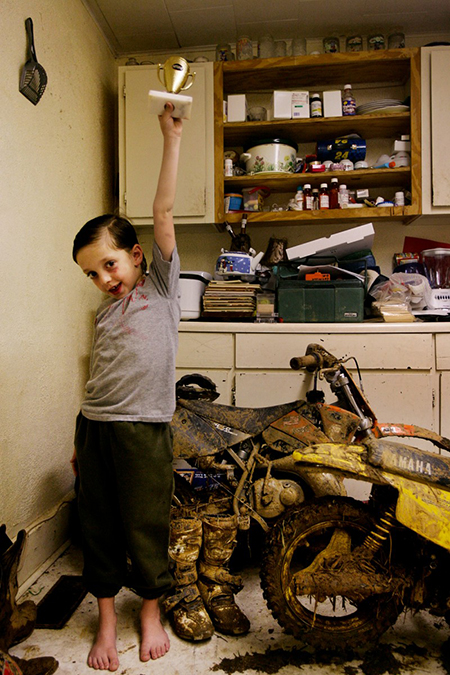 Matt Eich, from the "Carry Me Ohio" series, 2016, color photograph

Matt Eich’s photographs are disturbingly familiar. In one sense, their characteristics and subjects strike us as the stuff of ordinary life, yet they also retain an eerie sense of uncertainty. From suburban backyard activities like yard work and chores, to a shocking image of a pet zebra in Cumberland, Ohio, this oddness is downplayed by titles that only reference the city and year of the photograph. The series is entitled “Carry Me Ohio,” which is part of a larger book project that explores a handful of Ohio towns. The collected images provoke uneasiness that leaves one unsure if these subjects are really what they seem to be.

It’s certainly a version of Middle America that is subject to romanticizing, yet there are contradictions that mix emotions ranging from sadness to humor. A seemingly delightful image of a father carrying his daughter, but she appears to fall off the man’s shoulders. Terror overcomes her face as we wonder if she falling or perhaps she is being taken against her will. One is not entirely sure, as the questioning proceeds to who is this man? This dark line of inquiry continues repeatedly in the exhibit as responses range from hopelessness to hopeful. Eich’s critical documentation of these subjects raises second thoughts regarding the ways we imagine the heartland of this country.