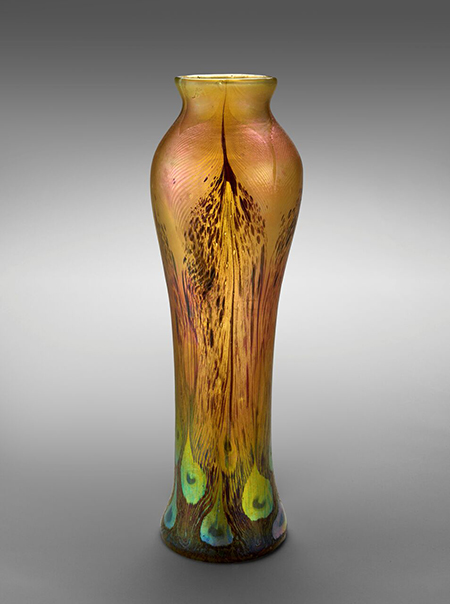 “Decorative Arts and Orientalism" is a little gem of a show, well suited to the Museum's intimate Alice Pratt Brown Gallery. Viewers who are seduced by exquisite detail and superb craftsmanship executed in an eclectic fusion of oriental, rococo and art nouveau styles will be mesmerized by the more than 40 pieces here, all from the the Museum’s collection. The show features American and European decorative arts ranging from a silver tea caddie to a writer’s desk, a Tiffany vase to a brass and earthenware clock. These pieces are characterized by luxurious fabrics, stylized floral motifs, and an interest in exotic creatures like elephants, peacocks and dragonflies. Moorish-style ceramics, Indian “Paisley” shawls, Chinese-inspired bamboo furniture and an elephant-themed vase are just a few of the objects on display.

This passion for the cultures of the “the Orient” — North Africa, the Middle East, India, China, and Japan — first took hold in Europe in the 17th century as a result of trade with those distant locales. There was a revival of the style in the mid-19th century. An 1896 Tiffany vase has an iridescent surface that includes peacock “eyes” circling the base. The French glass Elephant Vase has a parade of pachyderms circling it, while an English Peacocks Charger depicts a pair of the colorful birds with their tails on full display. Around 1930, this interest in Orientalism began to decline and was largely replaced by the new art deco style.