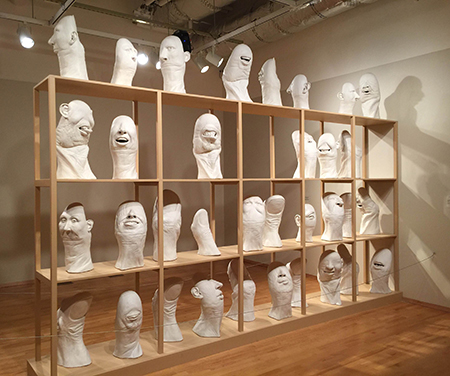 The title of Chicago-based artist Rodrigo Lara Zendejas’ exhibition, “Deportable Aliens,” is a reference to the terminology used by the Hoover administration to describe immigrants who were to be subject to Mexican Repatriation. In the 1920s and 1930s, the government forcibly deported hundreds of thousands (possibly millions) of Mexican immigrants living in the United States. Mexican Repatriation was carried out under the guise of “saving” jobs and welfare funds for “real” Americans, and it’s easy to see that this very same kind of racism has repeatedly and currently resurfaced in our national political dialogue. However, Zendejas’ exhibition is no mere illustration of this wrongful chapter of American history.

This two-part installation consists of both literal and symbolic imagery of the artist’s political content. With his “Immigrant Identification Card,” Zendejas recreates this document on an enormous scale, the plywood surface punctuated with a video projection of a rotating, two-faced bust, and text made using the artist’s own DNA: his hair and saliva. The exhibition’s namesake piece, “Deportable Aliens,” is a series of bust-sized, porcelain thumbs bearing individualized facial features: disembodied mustaches, smiling mouths, ears and noses. The sculptures are carefully lined up on a shelf, as if they were collected to be stowed out of the way. The power of these identity-based works comes from the artist’s ability to manifest the tension between the dehumanization of political rhetoric, and the humanity of the individual.