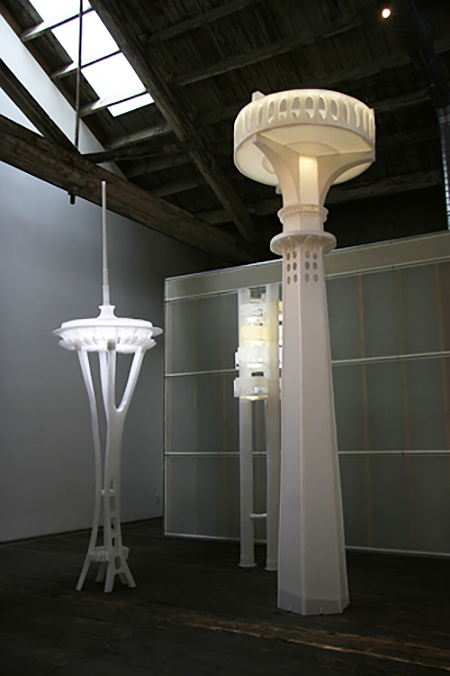 William L. Pereira was an important Modernist architect and urban planner based in Southern California. Innovative designs spearheaded new buildings and edifices during the 1940s, 50s and 60s. As part of the innovation, Pereira’s work was considered radical then, but now we are accustomed to his highly rhythmical and repetitious forms and his expansive rotund spider-leg structures that reach far above a cityscape and engulf the people below. In “Yesterday’s Future" six current artists transform some aspect of Pereira’s vision to produce art that is diverse, clever, and insightful.

Deborah Aschheim recreates in sculpture three iconic buildings — L.A.’s Capitol Records, Seattle’s Space Needle, and Pereira’s unrealized proposal for the Transamerica building. Aschheim turns the smooth and pristine architecture inside out, transforming them into raw sculptural forms by constructing the works from corrugated plastic, leaving drips of glue and penciled lines beside cuts done by hand. Her work exposes the never seen struggles and losses buried within the finished pristine edifice. Ed Bopp’s fluid paintings melt into abstractions, with graphite drawn suggestions of a colorful city and solid architecture dwarfed by an enormous vista. Jennifer Celio reminisces by rendering highly detailed drawings of the mid-Century suburban homes of her childhood. Their designs are functional and practical, contrasting with Pereira’s innovative architectural vision.

Betsy Lin Seder, a photographer, deals with the interaction and contrast of silent architecture on people who move within and without familiar urban forms. Her black and white images question whether utopian designs bring with them a utopian life. Lastly, there is the practice of Jonathan Anderson and Bryan Cantley, who integrate architectural concepts as springboards for their individual drawings and paintings. Anderson extends architectural renderings beyond the functional where the structure of the design, like Aschheim, focuses on the unromantic, the raw building rather than the beauty of a finished edifice. Cantley breaks boundaries by integrating conceptual art forms into what initially looks like architectural drawings. Each rendering becomes dynamic, sometimes playful, and always a captivating image.