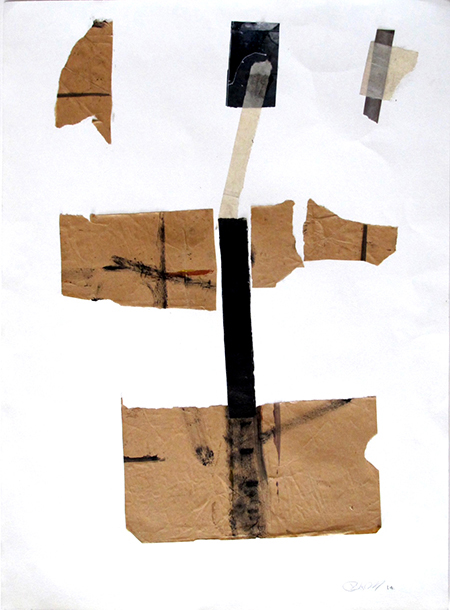 A cornucopia of precedents come to mind when viewing Bob Russell’s new work — surrealism, abstraction, synthetic cubism, collage and three-dimensional wall work. These pieces evolved out of a lengthy creative process inspired by Google satellite maps in conjunction with the artist’s ongoing interest in the relationship between man and the world. His investigation into how man affects nature and vice versa led him to the satellite maps, which reveal our effect on the earth, a fair portion of which has become a patchwork of cities and states, cultivated land and decimated forests. About four years ago, Russell exhibited a series of paintings based on the maps, and after that he filled a sketchbook with abstract drawings inspired by the paintings.

Meanwhile, Russell had been using large sheets of brown paper to protect the wall behind his paintings in progress. When one sheet became covered with residual markings, he would take it down and pin up a fresh sheet. When he was moving his studio, he discovered the rolled-up sheets of used brown paper and considered discarding them. While examining them, however, he became fascinated by the patterns formed by traces of pencil and paint, tape residue and the pattern of holes left by the pushpins, as well as folds, creases, and torn edges. Subsequently, noticing they had their own relation to his investigation, he began using the backdrops as a starting point for new drawings and paintings, augmenting them with oil pastel, graphite and geometric shapes created by connecting the pinholes.

All the work in this show is either drawn or painted on brown paper or created by collaging bits and pieces of it together. The more complex collages suggest the synthetic cubism of Picasso and Braque, in which they glued fragments of newspapers, wallpaper, cigarette packs, and other printed materials onto the picture plane. Russell’s paintings and drawings, with their abstract forms suggesting figures, animals, birds, fish, plants, clouds, etc., were also inspired by the work of surrealists such as Max Ernst and Yves Tanguy. Informed by an environmentalist’s point of view and filtered through a surrealist’s sensibility, Russell’s abstracted topographies blend intelligence, imagination and a skilled hand.