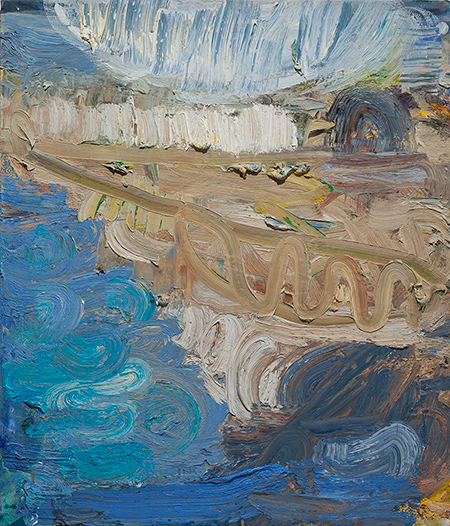 The Chicago plein-air painter John Santoro describes himself facetiously as an Abstract Post-Impressionist, referring, perhaps, to the Abstract Impressionist label that used to be affixed to Philip Guston, one of his major influences, the 1950s. He writes that he seeks “the humorous possibilities that exist in trees, rocks, flowers, and clouds.” There is nothing funny about his paintings, however, churning vortices of heavy impasto that depict his Chicago backyard, lake shores in Michigan and Florida, thunderstorms in Hong Kong, and extinct volcanoes in New Mexico (painted on vacation during frigid cold from the questionable, cramped comfort of his brother’s heated car). Santoro: “The landscapes I have chosen to capture are not necessarily extraordinary, but I endeavor to paint them in an extraordinary way. I am interested in the lush passages of oil paint, each brushstroke as evidence of an energetic spontaneity balanced with depicting an image.”

The dialogue between representation and abstraction is nothing new, of course, but Santoro’s delight in the motif and his painterly virtuosity (for which neither he nor any other accomplished painter need apologize) imbue his works, with their vibrant, high-key palettes and simplified draftsmanship, the impression of spontaneous play at a high level. “Flowers,” “Happy Mesa,” “Flowers at the Beach,” and “Backyard #3” all demonstrate that AbEx technique, despite the angst associated with it, can serve an Impressionist spirit that delights in recording and interpreting the visible world in terms of optically mixed paint. The  frothy but just-contained tempest of paint in “Thunderstorm” recalls Albert Pinkham Ryder’s declaration of artistic independence: “The artist should fear to become the slave of detail. He should strive to express his thought and not the surface of it. What avails a storm cloud accurate in form and color if the storm is not therein?”