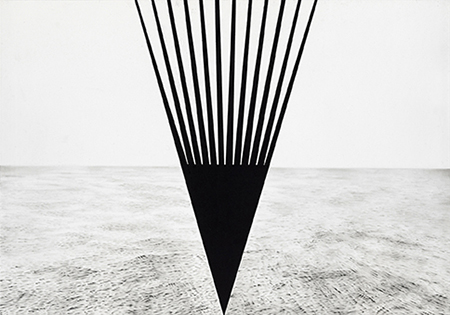 Barrera assembles a provocative array of drawings, sculptures, and installation pieces that continue her investigation into the desire most people have to escape their daily routines. The title of her show, “Avalon,” suggests the legendary island where King Arthur’s sword Excalibur was forged, a place that supposedly faded in and out of the mist. Found objects like a painted rocket positioned in front of a matching blue wall and a black racing helmet attached to the wall with a long gold chain suggest escape, as does an altered taxi light that casts a turquoise glow on nearby objects. Barrera even incorporates an emergency exit into the show by painting the double doors pink, placing LED lights behind them and titling the piece “Big Pink Moon.”

In “Floating CAMH,” water, steel, liquid silicone and pigment create the illusion of a small dark pool on the floor that seems to offer another escape route. Next to it, Barrera uses the edges of a trap door in the floor to frame an issue of USA Today with a story about NASA on the cover. In exquisite drawings executed in graphite, coal, oil charcoal and oil pencil, she references the puff of smoke the Wicked Witch used to vanish in "The Wizard of Oz," the Arctic Balloon Expedition of 1897, and the SpaceX Capsule from 2012. Other objects are more mysterious, like a fish tank filled with glass and hair gel, a melting block of ice and pigment, and two hygrothermographs titled “Invisible Records/Romance.” Like the mythical residents of Avalon, Barrera is something of an enchantress herself, creating two dimensional works and compelling installation pieces that do not readily give up their secrets.