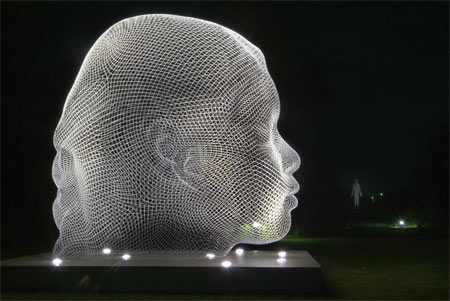 The Meadows Museum has recently added a number of sculptures to its already considerable collection, and one piece is particularly worthy of time and attention. Spanish artist Jaume Plensa’s “Sho” is a large-scale wire representation of a female facial construct named after a Chinese girl the artist met in Barcelona. One can’t help but marvel at the coincidence that her name is a homophone for the act of looking. He’s “showing” us an integral part of his friendship with a young girl — and, in the process, he reveals a great deal about the act of engaging with the world.  Plensa makes it possible to see her only by seeing through her.  The piece is constructed such that the mesh is sufficiently large to engage viewers in a way that demands we realize that world “within” is indistinct from the world “without.”  One might construe that what’s inside her ears, eyes, lips and head is not to be differentiated from the things she watches, hears, says and thinks. It’s all part of a Zen-like aesthetic that partakes of both commonsense and freshman-style epistemological questions. The genius of the piece is that we’re tricked into contemplating thresholds, the point of conjunction between outside and inside. Our very skin serves as barrier and point of contact with the world. However, Plensa shows us no luscious conjoining.  It’s bare and stripped and devoid of texture and the eloquence of clashing flesh. This is cranial, cerebral stuff. It won’t stir up feelings of longing — but it will make you think.