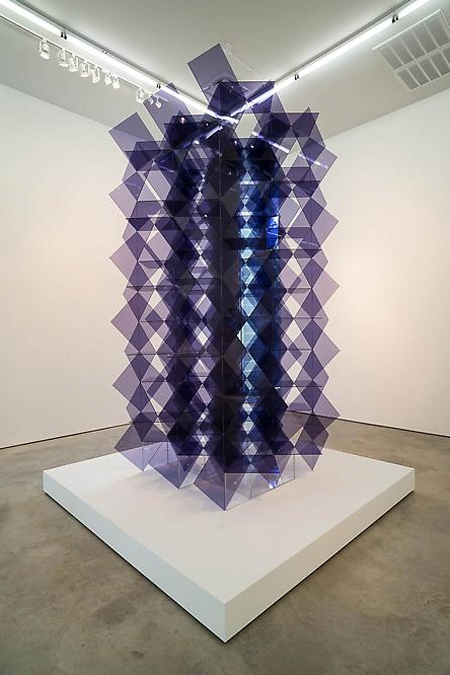 As one of the proponents of Op Art in the 1960s, Francisco Sobrino devoted most of his career to investigating the effects of light and color on viewers’ perceptions. The modular sculptures on display are designed to interact with ambient light and the environment. Four of them are constructed from interlocking sheets of purple-tinted Plexiglas. As viewers move around the pieces, they see shifting fragments of what is on the opposite side. The way the geometric pieces are fitted together and layered creates varying shades of purple, as well as shifting shadows. Two smaller sculptures constructed from shiny, reflective steel panels are even more optically complex due to their mirrored surfaces. The large sculpture that dominates the main gallery at more than eleven feet tall by five feet wide is composed of dozens of Plexiglas squares, some of which have been tilted on end to become diamond shapes. This spatially complex piece is the result of extensive technical expertise and planning, and had to have been a challenge to assemble. These sculptures were originally completed in 1963, but they have been updated and look as contemporary as the day they were created.

Sobrino was born in Guadalajara, Spain, in 1932 and died in Paris in May 2014, just a few weeks before this show opened. He began studying art in Madrid at the age of 14 and continued his studies in Buenos Aires before moving to Paris in 1959, where he remained until his death. Shortly after arriving in Paris, Sobrino joined a group of like-minded artists known as Groupe de recherché d’Art Visuel (GRAV), the best know member of which was Victor Vasarely. Sobrino began working with Plexiglas almost immediately, investigating how it reflected and absorbed light, as well as the shadows it created — an investigation that distinguished his entire career from that point.