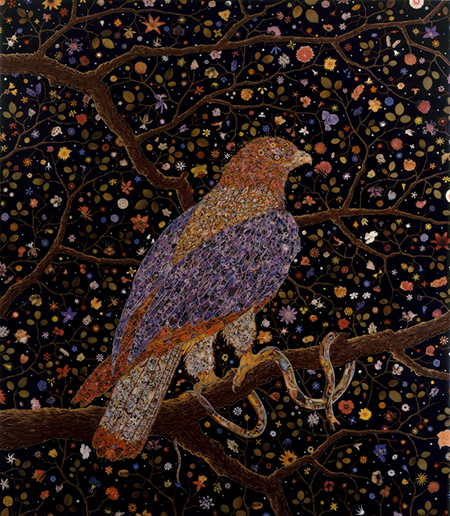 This smallish exhibition of large mixed media works by Fred Tomaselli possesses ample visual luxuriance. “Flipper” is a massive piece, measuring 15 feet across, that operates nicely as an abstract and colorful confection on a dark background. Tomaselli’s trademark composition of collaged elements is evident. This work is composed of brightly colored loops upon loops that are then coated in thick layers of epoxy resin. It embeds lyrical and profane objects in equal measure. Everything — including:  aspirin, magazine and field guide images, ecstasy tablets, marijuana leaves and, of course, paint — is enlisted to create a visual thrill.

“Flipper” is deemed by Tomaselli to be a hopeful nod to New Orleans in the aftermath of the Katrina disaster: “I wanted to … [celebrate] the rich musical heritage of New Orleans [and] you can read the small ovals arranged along the central horizontal line as the mouths of a gospel choir singing in the night …” It also feels positively Vedic, with its serious cosmic implications. It looks like a Carl Sagan-style “test pattern.” It’s dense; it’s honed; and it’s exuberantly ambitious.

Meanwhile, a host of works, dubbed “New York Times,” occupy a separate space in the show. They’re composed of scanned front-pages of the Times that were altered and subsequently printed on watercolor paper. They contort contexts and content. For instance, one work shows former presidential candidate Mitt Romney striding toward KKK clansmen. An image of Rick Perry is also used to interesting effect. In fact, the entire exhibition offers a vector into the crazy mélange of our culture, sometimes morphing its most vacuous facets into images that are either explosive or rapturous. Tomaselli has delivered a fine show — perhaps even a transformative one.