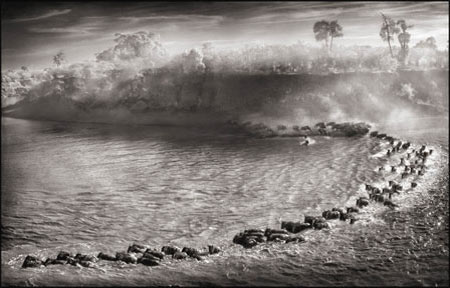 "A Shadow Falls" is a continuation of Nick Brandt’s ongoing effort to capture wildlife in East Africa and raise awareness that the most exotic animals on Earth are threatened with extinction. Although these large scale archival prints capture the massive scale of elephants, giraffes, lions, and herds of zebras, the scale also makes it apparent that the animals are dwarfed by the surrounding landscape, which is both vast and barren. It is only through Brandt’s lens that we can witness intimate moments shared by a lion and his mate, the affection between two giraffes who delicately wrap their necks in an embrace, and a lioness who feeds her cub while cautiously standing guard.