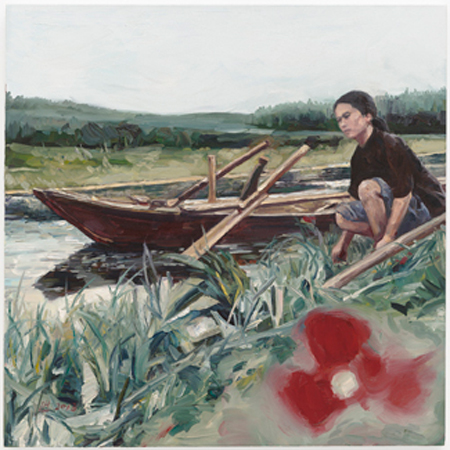 Chinese American painter Hung Liu has enjoyed decades of recognition — her dreamy, evocative paintings are transcendentally strange and ethereal: worlds unrestrained by associations to any one place or identity. Rendered in straightforward, earthy browns and greens, "Portraits of a Chinese Self" is a small body of work based on photographs of the artist taken during her early life in China, where she came of age during Mao’s Cultural Revolution. As a young adult, Liu studied painting at the Central Academy of Fine Arts in Beijing, an institution whose strict rules dictated what and how a student could make art. Upon immigrating to San Diego in 1984, Liu gladly departed from this rigidity.

"Portrait of a Chinese Self #2" pictures a winsome schoolgirl posing at the Great Wall. Her skirt billows up around her skinny legs and her countenance is both quiet and searching — belying a universally recognizable quality of longing or remembrance. "Portrait of a Chinese Self #5" depicts Liu with a small box of paints and brushes in her lap. In "Portrait of a Chinese Self #7," Liu kneels beside a stream. Long grass pokes up around her and a simple boat is pictured in the background. The scene is calm and lucid, save for the beguiling addition of a smudgy reddish flower in the lower right corner. Works like these solidify our sense that Liu paints the way we wish we could dream – with just enough clarity to know we are experiencing something spectacular and unnameably foreign.