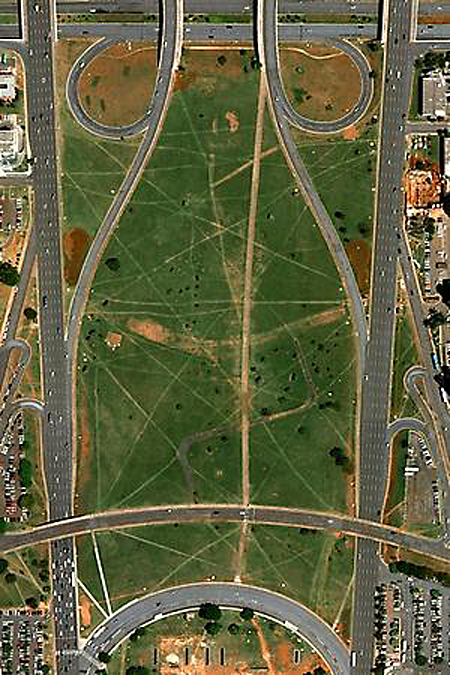 Clarissa Tossin is a conceptual artist who is fascinated by maps, mapping, and documentation of humans on the landscape. There are three distinct but related components in "Study for a Landscape." The dominant one, “Brasilia by Foot,” focuses on a large green space in her hometown of Brasilia, more specifically on the footpaths created by pedestrians crisscrossing it. In the show, there is an inkjet print of a satellite map of the green space and six small-edition prints of the same map made with ink that she created using soil from the actual location. The drawings document Tossin walking the various paths while counting the number of steps taken. Hence one of the titles: “Brasilia by Foot: 8,463 Steps.” “Ladrão de Tênis (Sneaker Thief)” is composed of 36 plaster casts of the inside of used sneakers mounted in rows on the wall. Although they bring to mind the subject matter of the map pieces, "Sneaker Thief" is actually about the rising number of violent crimes due to theft in Brasil, a direct result of the country’s growing capitalist economy.

The third component consists of two satellite photos, one of Brasilia and one of Mars. Tossin folds them into 3-D forms (a car and a rocket) and then unfolds them. The thin white lines produced by the folds create a pattern not unlike the patterns created by human foot traffic on the satellite maps of Brasilia. Tossin, 40, got her BFA in Brasil and an MFA at the California Institute of the Arts. A former Museum of Fine Arts, Houston, CORE Fellow (2010-2012), she has done residencies in San Antonio, Maine, Mexico City, and Spain. As an artist who addresses social issues, she uses the medium that can best convey her message. Tossin’s process is fascinating, and it would seem that she is just now reaching her stride.