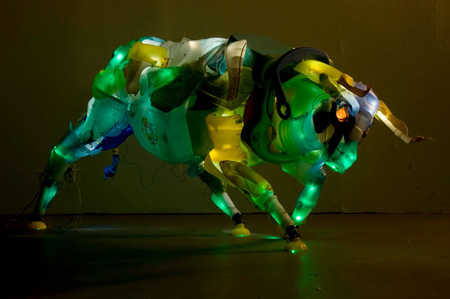 “Escape from the Landfill” can be loosely described as a collection of assemblage, as it is made from re-combining found objects. But these three artists' approach is of a different sort from the classic assemblage of Ed Kienholz, Joseph Cornell and George Herms, who found objects on the street and in thrift shops. “Escape” does employ throw-away materials: large plastic bottles and lids, containers, boards, bicycle and car parts. The spirit is environmental, conveying that these things are rapidly clogging our landfills, washing up on beaches and creating lethal whirlpools in our oceans. The show also includes dirty and broken toys that are too spoiled for recycling.

Cynthia Minet’s "Ox Pull," from her "Unsustainable Creatures" project, recycles plastic objects and containers from discount and hardware stores, as well as from dumpsters. Here, two life-size oxen, composed primarily of green, yellow and blue plastic, pull a plow made from a found piece of playground equipment. Illuminated from within by LED lighting, they suggest glowing beaches and oceans besmirched by tons of trash. These oxen, along with the artist’s red and orange "Camel," whose hump is made of a large plastic bin and legs of clear bottles, possess a grotesque beauty that compels us to stare, while reminding us of the plethora of waste we create.

Joyce Dallal’s "Receptacle" is a 10-foot tall sculpture made from trash can material. The object is that of a huge baby doll, filled with several hundred pounds of used and broken toys. Finally, there is Olga Lah’s continuous sculpture, "Propagate," made from thousands of white, yellow, blue and green plastic bottle caps, affixed to the ceilings, walls and floor. About this extensive installation, starting in the lobby and continuing through three galleries, the artist asks, “How does this ultimately reflect our overall approach to material consumption, our values, and our future?”