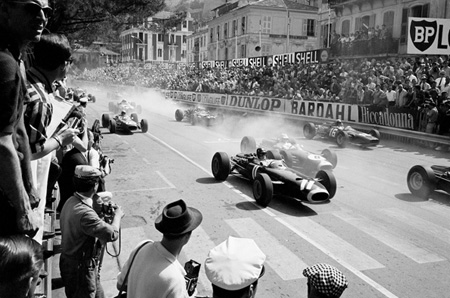 With energy at a premium, car racing identified as a right-wing male sport, and the world spinning in a hand basket, cars going very fast in competition with each other ought to make us irritable. Jesse Alexander’s vintage images – mostly from the 1960s – capture that Steve McQueen vibe, and they are – sorry to say it – stunningly alluring. These are not cars per se that are racing here, but those carts that left the driver the more exposed to elements and forces with one false move. Via the wonders of Alexander’s eye and the magic of f stops, scenes are stop-framed in sexy black and white shots of moving machines that actually go so fast it is dizzying.

In the 1955 “Virage de la Gare” (roughly translated: race course from the gate), the viewer is faced with a lateral and frontal band of carts shooting forward on as the city of Monaco rises behind. Another image freezes two contestants rounding a dangerous curve where palm trees cast this decorative, playful shadow. Some of the best shots are of the oh so cool, oh so elite spectators leaning against the guard rails, all looking away from us as heads reflexively track the smoke of carts that have just zoomed past. It is a guilty pleasure to imagine this world, but a pleasure nonetheless.