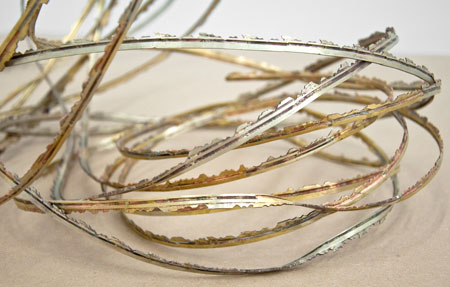 "Unexpired Time" is an understated show that tackles the mightiest of concepts: the ticking of the clock, the winding down of time. Barbara Smith, who trained in metals and photography at Purdue University and State University of New York, includes just a handful of works, each asking, "How much time remains?"

The main pieces are five photographs of the same two weathered parking meters; side by side, they can be interpreted as two human heads with each meter showing a different time remaining. The artist wants us to consider whether two people can intersect in that short interval of time. Similarly, we face the passage of time in "There and Back," a digital video projection with two overlapping scenes of cars on a highway. It combines footage of the view from behind the wheel, to represent the present, with footage of what appears in the rearview mirror, to represent the past. Time has a certain monotony, yet is dynamic when the present and past travel together.

Time as a journey is also seen in "Security," in which Smith has soldered together the jagged ends of discarded brass and steel keys into an almost 2-foot-high loose coil, shimmering in the light. Mundane objects in essence defy their disappearance into time and obscurity by populating an art object. We have to admire the unassuming use of simple materials in Smith's work, which all the while presents a poetic contemplation of a universal subject.