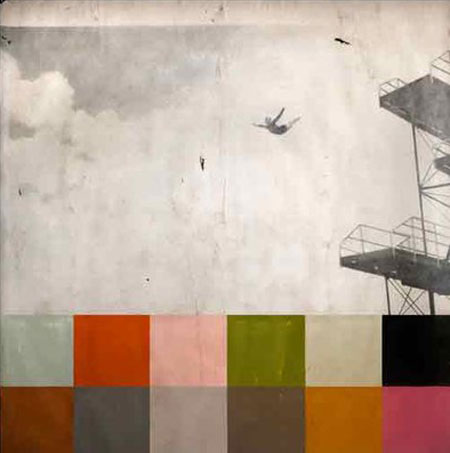 The invocation of mystery has been at the heart of art since ancient times. It's expression remains very much alive in Jane Hambleton’s new series of mixed-media drawings, entitled "Swimming Fields," the Berkeley artist finds analogies between swimming, floating, and diving — and even baptism by immersion — with mental states. Hambleton: “The surface of water is a[n] ... ambiguous and transitional plane, a threshold between the known world and the big mystery lying unseen in the depths below.”

The frozen figures in “Swimming Fields,” “Center of,” Color Dive,” “Body Above,” and “Piggyback,” derive from old photographs, and carefully drawn in graphite gray tones on large sheets of paper. But they are situated within the square compositions seemingly at random, off-kilter and elusive. Hambleton’s renderings, overlaid by thin glazes of oil (which appear to have been wiped away, leaving only textural traces), inevitably suggest narratives, letters and diaries. The effect is further enhanced by the handwriting that she occasionally adds, featuring literary quotations from Djuna Barnes and William Carlos Williams, and the deckle edges of the sheets, seemingly battered and rust-stained, suspended a few inches from the wall, rippling with each current. The uncertainty principle in her hands, though not Heisenberg’s, seems a fitting new world view, even if it's ancient.