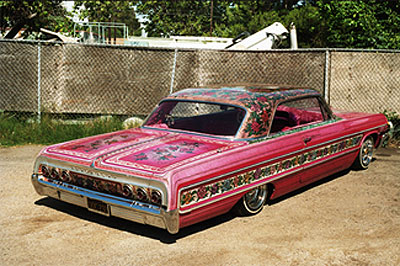 Everyone knows that California was a Mexican territory long before it became a state. In fact, Los Angeles is often referred to as Mexico's second largest city. Although Chicano art, Mexican art, and indigenous folk art are widely recognized today, the art world has overlooked the important role that Mexican culture historically played in California Modernism. The work of the legendary Mexican muralists (Diego Rivera, Jose Orozco, and David Siquieros) is always acknowledged of course; but they are referred to as Mexican artists, and set apart from the California art scene. (So were the intellectual writings ofOctavio Paz and Jose Vasconcelos.) "Mex/LA: Mexican Modernism(s) in Los Angeles, 1930-1985," is an attempt to set the record straight. The purpose of this exhibit is not cultural affirmation or historical revision, but to demonstrate how internationalism is a modern construct that is fundamental to Mexican/American/Chicano art - that it is, and always has been, an integral part of life in Southern California.

"Mex/LA" is huge, with examples of work by a cross-section of artists who have been influenced by Mexican culture throughout the state.  Some of the names are familiar (i.e., Carlos Almaraz, John Valadez, Graciela Iturbide, Guillermo Gomez-Pena); others will be quite surprising (Walt Disney Studio artists, Charles and Ray Eames, David Levine, Julius Shulman, Edward Weston, Millard Sheets). From 1945-1985, popular Mexican culture pervaded contemporary California culture everywhere one turned: from murals, painting, photography, and film; to animation, cars, fashion and food; to theater, music, and dance. And the beat goes on.