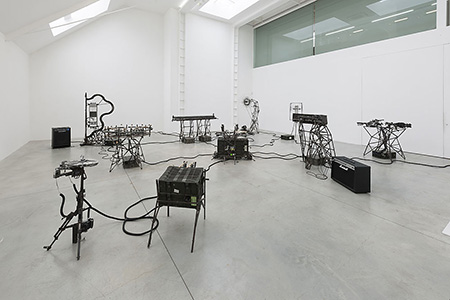 One of the most heated topics of the day is gun control, with many political leaders calling for a ban on assault weapons. According to a “Washington Times” poll taken in August [https://www.washingtontimes.com/news/2019/aug/8/majority-republicans-support-assault-weapons-ban-p/?], such a move is favored by a majority of Americans, including Republicans. Although it is still too early to predict if such a ban will come to fruition, one of the questions that will inevitably be asked is, “What do we do with all those guns?” For politicians and officials looking for answers, the recent work by the Mexican artist Pedro Reyes provides food for thought. And he is but one of many artists turning guns into art.

In 2008, Reyes launched “Palas por Pistolas,” a national campaign to reduce the sale of small firearms in Mexico. Working in collaboration with local government officials and the Botanical Garden of Culiacán, Reyes set a new national record for voluntary donation of guns, which he then had crushed with a steamroller, melted down, and remolded into shovels. Upon transforming these dangerously destructive weapons into new useful and relatively safe tools, he distributed them to schools and arts institutions in Vancouver, San Francisco, Paris, Marfa and other cities where local communities were instructed to use them to plant trees. Based on the project’s success, law enforcement authorities contacted Reyes to offer him a cache of 6,700 confiscated guns. This time he disassembled and reconfigured the gun parts to create “Disarm,” a collection of sculptures that double as musical instruments. They have been exhibited and played in performances in Mexico City, London and elsewhere. Symbolically, Reyes’ projects converting guns are perfect examples of turning patriarchy into matriarchy.

In the early 1980s, the Los Angeles/Taos artist Gary Lloyd used similar symbolism in sculptural and painted representations of a fireman’s ax, but left the question of its function open-ended. Is it an object of destruction or of utility? Put another way, Reyes and Lloyd profess nurturing and healing, over punishing and hurting. This duality is at the core of competing approaches to our justice system and the political climate in general. Call it the “war between the sexes” if you will, but this unresolved battle is one of the most urgent being waged today. In my view we need and are ready for a female president who will nurture the nation by limiting its guns and rebuilding our infrastructure.

The idea of subverting the main purpose of guns by converting them into art is not a new one. In the 1970s, for example, the late Los Angeles artist Leonard Poteshman cast a 12-foot-tall sculpture made from remnants of 7,000 handguns and rifles that had been used in crimes [ https://www.latimes.com/archives/la-xpm-1986-09-11-vw-11216-story.html]. The gun parts were donated by the local sheriff’s department. In the 1990s, District of Columbia artists Esther Augsburger and her son Michael built a 16-foot-tall sculpture from thousands of guns confiscated during a D.C. buyback program [https://www.washingtonpost.com/local/guns-running-a-distinctive-sculpture-from-dcs-dark-days-is-on-the-move-again/2017/09/11/38b027a2-96fa-11e7-87fc-c3f7ee4035c9_story.html?noredirect=on]. Foreshadowing Reyes’ shovels, the sculpture was shaped like a plow, which is similarly a tool for growth and productivity. During the same period, Portland, Oregon artist Brian Borrello, then living in New Orleans, organized an exhibition of art made from decommissioned guns. After acquiring the guns through a trade-in program, he offered them to other artists to create works for an exhibition held at New Orleans’ Positive Space Gallery and locations in other cities.

Given the uptick in mass shootings in the past decade, it is not surprising that the practice of making art from guns has greatly accelerated, with gun-derived sculptures or exhibitions emerging all across the U.S. In Los Angeles, County Sheriff Alex Villanueva recently announced the donation of thousands of confiscated weapons to the “Peace Angels Project,” an initiative started by artist Lin Evola [ https://www.facebook.com/peaceangelsproject/photos/pcb.1033391613532326/1033391550198999/?type=3&theater]. The organization aims to collect one million weapons for the creation of “The Los Angeles Peace Angel,” a public sculpture earmarked for downtown (monuments are also being developed for Silicon Valley and New York City). In August, the Anacortes Arts Festival in Washington State participated in the “Regeneration Project” [https://anacortesartsfestival.com/guns-to-art-project], a guns-to-art program through which artists are transforming donated guns into artwork that will honor victims of violence and first responders.

One of the most ambitious and laudable projects to date is a collaborative effort in the Bay Area between the Robby Poblete Foundation and United Playaz. The former, founded by Pat Navalta Poblete following the shooting death of her son during a robbery, oversees an annual gun buyback program and partners with law enforcement to create an ongoing exhibition series known as “Art of Peace.” The latter organization works with underprivileged youth, with a focus on violence prevention. Thus far they have mounted four exhibitions, with the latest occurring this summer at the Yerba Buena Center for the Arts. A group of East Bay artists and artist teams, most of whom have been affected in some way by gun violence, were selected to create art from confiscated gun parts on the theme of transformation. One inspiring example is Clody Cates and Gaige Qualmann’s “Return to Nature,” for which the artists used rifle stocks and shell casings to create a free standing tree with blossoms made of copper bullets. Another is Darrell Hunger’s “Silent Violence,” a dismantled rifle stock enveloped by a circular base made of guns. Embedded in its body are 63 casting ends representing the average number of daily U.S. gun-induced suicides.

The “Art of Peace” project is already making a national impact. One of this year’s exhibitions was held in Augusta, Georgia. The Robby Poblete Foundation was recently invited to join the International Action Network on Small Arms, which seeks to reduce gun violence globally. Artists wishing to participate in future exhibitions should visit the foundation’s website, [https://robbypobletefoundation.org].