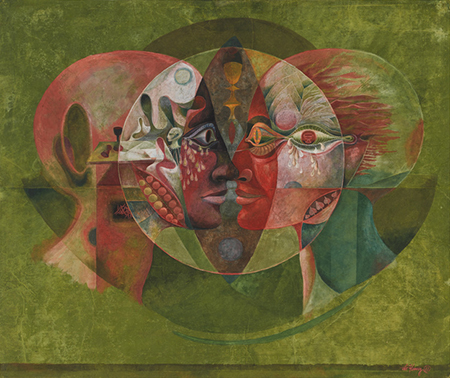 With the death of art critic and AIDS activist Douglas Crimp in July, another era of contemporary American art has come to an end: the focus on AIDS as the dominant fulcrum for art by homosexuals. The transition of AIDS Art from Gay Art to Queer Art occurred in many parts of the U.S. beyond New York. However, it's important to note that AIDS Art, currently chronicled in at least two nationally toured group shows, replaced Gay Art, to be followed by today's focus on Queer Art and art by transgendered individuals. Before all that, one area, the Pacific Northwest, must be recognized as the only region in the country where an entire art movement was founded exclusively by homosexuals, the so-called Northwest School, école du Pacifique (as it was referred to in Paris), or the Big Four of Mark Tobey (1890-1976), Morris Graves (1910-2001), Guy Irving Anderson (1906-1998) and Kenneth Callahan (1906-1986). Callahan may have been bisexual (and was married to art critic Margaret Bundy, who championed the group) and, even though his imagery revolved around muscular male nudes burning in hell, in this Gay Art canon I am replacing him with another colleague of the group, the less well-known Leo Kenney (1925-2001) whose work, like the others, contains submerged sexual symbolism.

Before there was AIDS Art and Queer Art, there was Gay Art, art made by homosexual men and women. I have sought to demonstrate that Gay Art began as early as Tobey's arrival in 1923. Gay men not only dominated the art scene and the market (they were also among the leading art dealers, such as Gordon Woodside, Don Scott and Donald I. Foster), they shaped the response to their art as anything but homosexually inclined or referential; to be openly gay was too dangerous. Everything personal had to be symbolic.

That is why, in 1981, when my essay "Prometheus Ascending: Homoerotic Imagery of the Northwest School" appeared in Donald Kuspit's quarterly journal "Art Criticism," no one had ever posited in print that, besides Tobey, Graves, Anderson and Kenney being gay, their subject matter and content was equally absorbed by gendered issues such as physical culture, all-male clerisies and cross-dressing. All this had been ignored by Seattle and Portland critics, curators and, above all, by the affluent elite who patronized their art. Instead, the development of modernist abstraction provided Tobey, the oldest and most well-known, as a cover to transition from his sexually charged male imagery of the 1930s and 1940s to a more marketable all-over abstraction that was light years ahead of Jackson Pollock. Clement Greenberg brought the young artist to Tobey's exhibition at the Willard Gallery in 1944 so the Wyoming-born upstart could see what a widely distributed composition looked like. The rest, for Pollock, is history; the rest, for Tobey, led to decades of ignoring the first, more gendered, half of his oeuvre. It was a trade-off that led to his being the first American since Whistler to win the Grand Prize at the Venice Biennale (1958), and a survey at the Museum of Modern Art, New York (1962). In this sense, one could say that Tobey's "white writing" acted as a screen to conceal his dancing, twisting and praying male figures, often nude or dressed in long-flowing priest-like gowns as in "Rising Orb" (1935). The outlines of the bodies became the "white writing."

Graves, twenty years Tobey's junior, alienated his mentor by adapting "white writing" to lichen or defecation on the rocks perched upon by his lonely birds. A sensational success came suddenly in 1942 with his inclusion in MOMA's "Americans 1942: 18 Artists." He was mentioned in "Vogue" and a Broadway play, and saw works acquired by prestigious East Coast collectors who identified his mock-scrolls of still lifes, goblets and bronze vessels with their Asian art collections. Graves, nearly 7 feet tall and enormously handsome, attracted the attention of Hollywood actor Charles Laughton, whose wife, actress Elsa Lanchester, was reported to comment on the 12 Graves paintings hung in the actor's bedroom: "Charles, this is the work of a fairy Chinese interior decorator!" (Though married, both Laughton and Lanchester were gay).

Following the footsteps of Whistler's orientalism, Graves traveled widely to Japan, India and Ireland (from where he was deported for immoral behavior), while continuing the series of vulnerable birds, which I read as self-portraits. In addition, an earlier painting, possibly a self-portrait or a portrait of Anderson (with whom he had a relationship in the late 1930s), "Morning" (1933) displays a supine nude male with a muscled arm between his legs and upended posterior. "Morris Graves: Vision of the Inner Eye" by Ray Kass (Phillips Collection, 1984) only indirectly addressed his sexuality. "Selected Letters," edited by Vicki Halper and Lawrence Fong (University of Washington Press, 2013), mentions homosexuality in a dozen or more places, and also reveals the artist's regrettable anti-Semitic views in six letters, usually targeting collectors or dealers.

More recently, Anderson is the subject of a four-volume catalogue raisonné edited by his partner Deryl Walls (Gallery Del Gratia, 2014-19). While Graves and Tobey suspended the male figure to join the modernist bandwagon, Anderson retained the male nude for the ensuing 30 years. Often 10 to 15 feet wide, the tall oils painted on wire-reinforced tar paper position hunky nude men with flaccid organs surrounded by moon-like circles and Native American symbols. My analysis of a nascent gay sensibility in Anderson provoked outrages at the time, including threats of violence and death.

Kenney, the youngest of the group, developed mostly after World War II. His meticulous tempera abstractions of mandala shapes can now be seen as transitional paintings from Gay Art (symbolic, indirect sexuality) to Queer Art. Remarkably fusing modernist abstraction with a sexually charged symbolism, "Seeker: To David Stacton" (1968) is a vertical geometric composition that reads as a full-frontal view of a male figure, complete with navel and phallus. Influenced by Surrealism and the gay Neo-Romantic artists Pavel Tchelichew and Eugene Berman, "Sleeping Seed" (1966) suggests sperm swimming on a pale lavender and blue ground. More explicit, "Voyage for Two" (1953) affirms Kenney's aesthetic of submerged erotic symbolism. Two heads are seen in profile touching noses. His art was the subject of a retrospective at the Museum of Northwest Art in 2000. The catalogue essay by art critic Sheila Farr avoids deep analysis other than one reference to "abstracted sexuality."