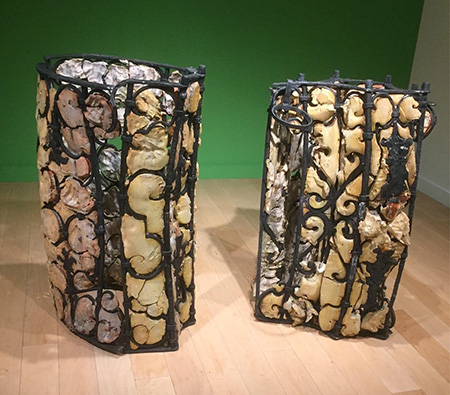 I recently visited the Museum of the African Diaspora (MoAD) in downtown San Francisco to view "Coffee, Rhum, Sugar & Gold: A Postcolonial Paradox." Featuring the work of ten contemporary artists connected to the Caribbean by birth or focus, this compelling exhibition occupied most of the second and third floors in the museums' compact footprint. I knew the name and work of only a tiny fraction of the artists, which made seeing the show all the more meaningful. I looked closely at each piece, read the informative, densely-written labels, and reflected on the ideas foregrounded by curators and artists alike.

While there, a panel discussion was taking place on the topic of "power, resilience and resistance in the postcolonial Caribbean." All four speakers and the vast majority of the attendees seated in the audience were people of color. So were most of the other visitors walking through the show: young and old, couples and families.

I note this fact simply because of how unusual it is. Broad statistics for museum attendance confirm what I have observed over the years: even as the U.S. population shifts gradually but inexorably towards diversity, the audience for most art institutions is (still) overwhelmingly white. One reason for this is surely the fact that, historically, museums reflect the values and beliefs of the wealthy and powerful individuals who created them. As a consequence, institutional roots lie in colonialism, and the dominant narrative has been singularly white and male, either fetishizing or diminishing art from non-Western cultures.

I thought about this recently when the Museum of Fine Arts in Boston was in the news after a class of Black middle school students on a field trip there — a reward for being on the honor roll — experienced racist behavior from other visitors. They also felt that they were being followed by guards as they moved from gallery to gallery. They became so upset that their teacher cut their visit short. In the aftermath the MFA apologized, rescinded memberships of two individuals and vowed to do better. Was that enough? Probably not.

Culturally speaking, we are in the middle of a powerful moment. Black artists are enjoying well-deserved and substantial success, both critically (solo shows in A-list galleries and museums) and financially (ever-higher sales and auction numbers). The celebrated sculptor Martin Puryear, representing the United States at the Venice Biennale this year, is African American. Same for Mark Bradford, the featured artist in the 2017 Biennale. We now have a National Museum of African American History and Culture in Washington D.C. that is so popular that, three years after its opening, tickets are still difficult to get during the spring and summer. And if the number of African American curators or full-time professors is still relatively small, that too will continue to shift in the next decade.

Change seems inexorable and unstoppable. Perhaps there are factors that could not have been anticipated when the Association of American Museums published their pessimistic report in 2008 on demographic transformation and future museum attendance. Successive waves of black activism have pushed race-related issues to the forefront of culture. Yet, even as some kind of cultural parity seems to hover on the horizon, institutionalized racism and anti-immigrant sentiment — in tandem with income inequality and crumbling educational systems — conspire to slow progress. Setbacks like that unfortunate field trip in Boston still happen. Several of those students have asserted that they never want to go back to the museum, described by one of them as a "white people place."

Changing institutions like a major museum can be like turning a really big ship around: it takes way longer than we might think. One solution is to create new ones — not ships, institutions. Like MoAD, or the National Museum of African American History and Culture. Another is to continue to both expect and attend exhibitions of both contemporary and historical Black art. (It would also be helpful if school systems everywhere would stop cutting arts curriculum in favor of STEM education.)

After I left MoAD, I went around the corner to SFMOMA. It was a Saturday, and the building was jammed with seemingly thousands of visitors. Standing beneath the giant Julie Mehretu paintings in the lobby, I watched people coming and going. I saw substantial diversity, both in terms of age and race: more than I remembered from many past visits. Maybe our ship isn't just turning around, it's actually changing course before it hits the metaphorical iceberg. One can only hope.