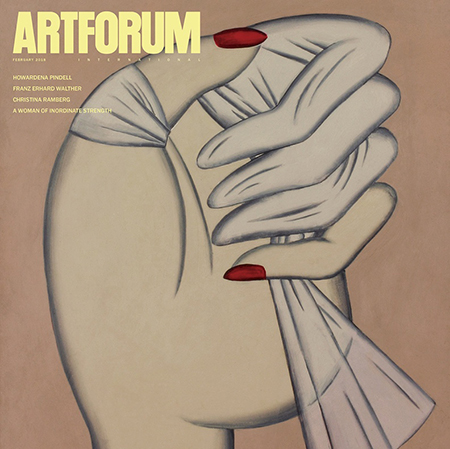 I don't know if Dennis Adrian was able to see the cover of the February 2018 issue of Artforum. He died later that month in Astoria, Oregon, and perhaps his mind was then on other matters. But there it was, a big and bold reproduction of Christina Ramberg's painting "Hand" (1971), with a 16-page (!) article within. Dennis, like a lot of Chicagoans (Adrian lived and worked in Chicago for well over 50 of his 80 years) would probably have been both pleased and annoyed; pleased that a late and great artist and friend — one of the Chicago Imagist group for whom he was the chief interpreter and scribe — was getting some major national/international play. But there would be more than a twinge of annoyance too, that Artforum's editors, even in 2018, must have thought that Christina Ramberg's art would be so little known to their readers that 11 of the 16 pages in Dan Nadel's article were made up of full-page illustrations of her work.

This wouldn't have surprised Adrian; he was probably as bemused by the recent 'discovery' by the New York audience of artists such as Ramberg, Suellen Rocca, Diane Simpson, Karl Wirsum and more as many of us in Chicago are. We tend to see it as akin to Native Americans who were encountered by the Spanish conquistadors in the 16th century. We might be a discovery for them, but we've been here all the time, going about our business without their acknowledgment or interference. Adrian was a perfect example of the advantages and disadvantages of the regionalist art critic and writer, deeply embedded in his community, dedicated to articulating what made its artistic traditions different than those pursued elsewhere (including New York) and playing a role in goading continuing excellence and attention. Dennis could — and did — write beautifully about Philip Pearlstein, Lovis Corinth, Leon Golub and the like, but his greatest concern was with the Chicago artists whose work he could most closely monitor, people he got to know personally and whose art reflected their engagement with the culture and the city that had become his home. I consider Adrian one of the very finest Chicago art writers of the last half-century. If you chance to find the compendium of his selected essays, "Sight Out of Mind: Essays and Criticism on Art," buy it. Adrian took the term "Chicago Imagism," coined by Franz Schulze (another great Chicago art writer) and applied it to the generation of the Hairy Who. Then he chronicled their followers' followers as well.

Dennis was a challenging individual, both loved and maligned with a special intensity. He had a scathing, ribald and lightning quick wit, and anecdotes about his spitting on people and provoking fistfights abound (I think each happened precisely once, but in their endless retelling you would think he did little else). He taught for a while at Northwestern University and at the School of the Art Institute of Chicago, and at both he was politely invited to move along because of his often confrontational and sometimes abusive manner toward students. To this he added chain-smoking, and occasionally came to class after a bit too much wine at lunch, not to mention a good dollop of invective-laced misogyny.

It was all a bit of a local version of what it must have been like living alongside Oscar Wilde: a man not to be forgotten, but not someone with whom you would choose to trade barbs. With Adrian your choice was whether to be at his feet or at his throat. As his junior, I chose the latter, and while we had an amicable professional relationship (mostly through correspondence), we also spent a lot of time making believe we didn't see each other at art openings and the like. But there was no mind, before or since, on the subject of modern and contemporary art in Chicago, that I took more seriously than Dennis Adrian's. I still do.

I've spent some time on the web unsuccessfully trying to learn the precise date of his death last month (he was born in Astoria and returned there for most of the last ten years of his life; Wikipedia lists 40 notable people from Astoria, Oregon, and Adrian isn't one of them). The only serious obituary I've been able to find so far is Artforum's. His books are mostly out of print. Many of the great Chicago artists he is most identified with have preceded him to the grave: Ed Paschke, Roger Brown, Ramberg, Don Baum, Miyoko Ito, etc. All of this is not an uncommon denouement for a regionalist art writer. But Adrian's writing deserves to survive. Hs ideas, whether you agree with them or not, still create the context for much of how Chicago is perceived as an art center largely independent of cultural pursuits elsewhere. His voice explained how it occupies its own niche in the dense matrix of American art. This was art criticism as an accomplishment of historic significance.