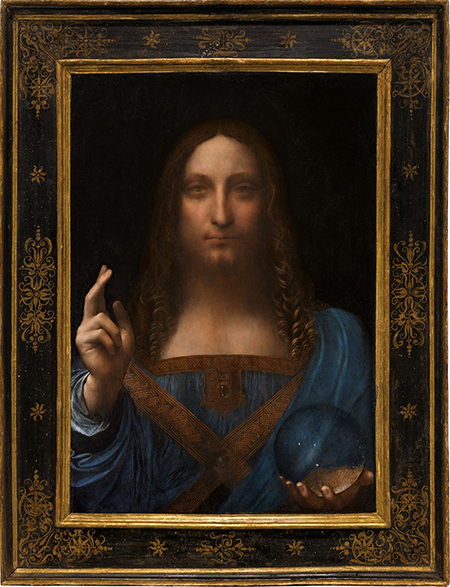 You would have to be living under a pretty big rock not to have heard about this by then. What purports to be an original painting by Leonardo da Vinci is on the open market — the first time a Leonardo painting has been offered for sale since 1914.  While there’s been a pre-sale estimate set at $100 million, whispers of twice that amount, perhaps even more, are percolating. This sale might break the record for a work of art sold at public auction, currently held by Picasso’s "Les Femmes d’Alger," sold for $179.4 million on May 11, 2015, also at Christie’s in New York). We’ll know soon enough, and a great deal of what will determine the final price paid for this painting is the depth of conviction on the part of its eventual purchaser as to whether this work was or wasn’t actually painted by Leonardo himself. More on that in a bit.

I’m finding it fascinating how the art press is handling the story of this rediscovery. Christie’s has smart marketing people who know very well how to build up suspense and attract public attention. As the auction approaches every late-night talk show host will probably mention it with some witticism, and newspapers and TV news stations everywhere will cover the impending sale in expectation of the record selling price. As I write this, Christie’s website forces you to scroll through four other ‘slides’ promoting other sales before “Salvator Mundi” appears. If you click on it you’re transported to a page with a 5-minute video and a well composed text that plays up the painting as a mystery solved and as a new aperture into the mind of perhaps history's greatest artist.

The art press has thus far been surprisingly timid and obeisant in their coverage. If it has acknowledged challenges to the attribution of the painting, coverage has mostly discounted them. Celebrating the rarity of a find such as this it has been treated repeatedly as a "from the junk heap to the mansion" kind of tale. As is often the case, particularly in the case of Old Masters, the British press has been more thoughtful and perceptive than our American counterpart. And then there’s this odd (read: suspicious) coincidence that Walter Isaacson’s new biography of Leonardo da Vinci was released on October 17. The best-selling author of blockbuster biographies of Albert Einstein, Benjamin Franklin and Steve Jobs, Isaacson is on a nationwide press blitz promoting his new book after its first week. He’s naturally asked at every stop about this ‘new’ Leonardo painting, which he does discuss in the book, and he may be counted among those who support its attribution to Leonardo. The film rights to Isaacson’s new biography have already been sold to Leonardo DiCaprio (could you make this stuff up?) for somewhere in seven figures.

Disclaimer: I have not seen this painting in the flesh and would not identify myself as a Leonardo scholar; but I do regularly teach courses in Italian Renaissance and Baroque Art at the School of the Art Institute of Chicago. There’s little question that a painting of Christ as "Salvator Mundi" (Savior of the World) emerged from Leonardo da Vinci and/or his workshop or professional milieu sometime close to 1500. Dozens of workshop copies or contemporary variants of such a painting exist, but the original was long thought to be lost. Enter the purported original — its provenance is spotty. We know at least that in the seventeenth century it belonged to King Charles I of England. It surfaced from time to time, was considered a mediocre copy and sold at auction in 1958 for as little as 45 British pounds, about $945 today. In 2007 it was professionally cleaned and much disfiguring overpaint was removed. In 2011 it was authenticated by a number of Leonardo scholars as an original work. While this opinion is not held unanimously it is fair for Christie’s to state (as they do repeatedly): “The study and examination of the painting by a panel of international scholars resulted in a broad consensus that 'Salvator Mundi' was painted by Leonardo da Vinci.”

In my opinion it’s a bit of both worlds here. Some of the painting is exceedingly fine, the right arm and hand of Christ, raised in a blessing gesture, is terrific, and that is about as perfect a Leonardo hand as I have ever seen. The gentle flow of the fingers, their calming aura, create something between the real and the ideal that is mesmerizing. I find the drapery covering that right arm to be similarly perfect, a fussy but rich array of folds and tightening drapery that draws the eye into its vortex. I would argue that only Leonardo da Vinci could have painted that arm and hand. The rest of the painting? I don’t get the same feeling from it. The rendering of the rest of Christ’s drapery seems perfunctory, just masses of cloth. There’s confusion about the glass orb Christ holds in his left hand. The head of Christ seems a bit vacant.

All in all it’s well painted but it appears so much less psychologically and physically intense than the majesty of that right arm and hand. We know there are instances where Leonardo worked with assistants and I personally conclude that this painting is one of those. He did have a few excellent students and followers — Bernardino Luini and Giovanni Antonio Boltraffio come to mind — who would have been capable of something like this. If nothing else, its appearance these last ten years is “the greatest artistic rediscovery of the 21st Century.”  Now we just have to wait and see if two multi-billionaires agree come November 15, and bid "Salvator Mundi" up until one decides to stop. Then at least we’ll know what the market thinks.