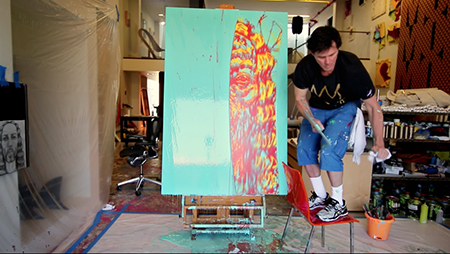 Jim Carrey at work in his studio in the documentary "I Needed Color." Screenshot courtesy of Signature Gallery Group

A couple years ago, tabloid magazines announced that actor Brad Pitt was taking painting lessons. This spring, we learned he'd taken up sculpting. Last month we found out that actor Jim Carrey is a painter, too. Among my artist friends, this type of "news" unfailingly elicits groans, gripes, and vineyards worth of sour grapes.

The crux of their incredulity tends to go along these lines: Isn't it enough that Brad Pitt is a famous actor, a gazillionaire, and has been named People's "Sexiest Man Alive" not once but twice? Does he really have to go off and become a sculptor now? There's a feeling that actors should stick to acting and leave art to "real" artists — that a presumed dilettante somehow dilutes the integrity of legitimate art; that moonlighters cheapen the value of an M.F.A. degree earned through study and commitment, and ignores the very real sacrifices many artists put themselves through in order to make a living making art.

I sympathize this attitude up to a point. I have written about and gotten to know enough artists to appreciate the tenacity and thick skin the artist's life demands: working day jobs, not having health insurance, making pieces on spec, trying to land a gallery, summoning the emotional courage to put your innermost thoughts on public display, having shows that don't sell, getting rejected for grants and residencies, getting bad reviews or, even worse, getting no reviews. This is not an enterprise for the faint of heart. So when highly paid entertainers waltz into the visual arts and receive breathless press coverage of their "hidden talent" or "secret passion," I can understand why lifelong artists roll their eyes.

Part of their annoyance, I infer, stems from a belief that the art world is like a pie, with artists tearing each other's eyes out for their own small slice, or even for a few crumbs; and that those who have won fame in other disciplines possess an unfair advantage over the 99.9 percent of artists who aren't public figures. Also, given the shrinking amount of ink devoted to arts coverage and art criticism — and with entire art magazines folding (eg, "Art Ltd." was shuttered earlier this year) — artists feel that movie star-cum would-be art stars are stealing valuable newsprint and bandwidth from artists who have devoted their lives and livelihoods to their art.

The phenomenon of the weekend painter, the hobbyist, the moonlighter, isn't a new one, nor is the ambivalence we have toward them. On one hand, we are invested in the democratic notion that everyone can be an artist; that given training and time, anyone can open the right hemisphere of their brain and discover a creative capacity. On the other hand, we cling to the elitist notion that the arts are rarefied territory inhabited by highly sensitive souls who have access to deep insights and quasi-shamanic powers.

We remain conflicted, therefore, about the dabbler, especially the privileged celebrity who strays into a studio, picks up a chisel or paintbrush, and suddenly feels the expressiveness of Brancusi or Picasso welling up within them. Pitt and Carrey have no monopoly on this, of course. Actor Dennis Hopper was not only an ardent collector but also a superb photographer. Roddy McDowall was a fine photographer, as is Diane Keaton. Famous singers often venture into visual art. Operatic tenor Luciano Pavarotti painted colorful Italian cityscapes. Tony Bennett may have left his heart in San Francisco, but he hasn't left his art in the studio; his paintings were displayed this summer at The Paley Center for Media in New York. Joni Mitchell may be no Joan Mitchell, but she's a gifted and inveterate painter who has told interviewers she considers herself an artist first, a musician second. "I'm a lonely painter," she sings in "A Case of You," "I live in a box of paints." Her self-portraits, some of which grace her album covers, are penetrating, moodily enigmatic, and haunting. I wouldn't envy the poor soul foolhardy enough to tell Mitchell to stick to her day job.

And so, while I grant my artist friends their prerogative to cry foul, I don't think we have the right to tell Mr. Pitt or Mr. Carrey to keep their dirty paws out of the art-world cookie jar. Creativity comes in many forms, and far be it from any of us to limit anyone else's expression, even a movie star's. Actually, there is one exception: James Franco.