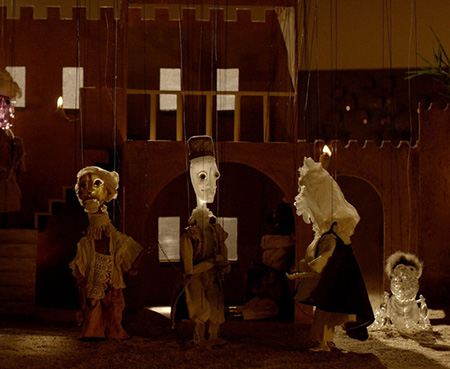 If only Donald Trump, with his "My way or the highway" bullheadedness, could visit — and take a lesson from — the paean to pragmatism and cooperation that is the sixth Yokohama Triennale.

Attending the show’s press preview last month (it closes November 5), I was struck by the contrasts between the show’s theme, “Islands, Constellations, & Galápagos,” and the unilateralist approach the U.S. President espouses in everything from trade agreements to environmental and immigration policy. The Triennale’s opposition to this brand of “me-first” separatism is established straight-away by the counterposition of two sculptural works at the show’s west entrance: Ai Weiwei’s “He Xie” (2011), a teeming installation of 3,000 porcelain crabs; and the piece directly opposed to it spatially and philosophically, Maurizio Cattelan’s “Untitled,” a wax effigy dangling limply on a coat hanger, alone on a vast white wall. While the crabs congregate for safety and competition, the lone man on the empty wall waits for something to happen — idle, isolated, impotent.

In their selection of artists and works, curators Miki Akiko, Osaka Eriko and Kashiwagi Tomoh echo John Donne’s admonishment that “No man is an island entire of himself,” but that we are, rather, stars within constellations, islands within archipelagos. These metaphoric archipelagos, like the actual Galápagos islands, incubate staggering diversity. It is a thesis especially apropos to Japan, a country comprised of four main islands and 6,848 smaller ones, whose collective culture is marked by a long history of assimilational knowledge — that is, by a strategy of combining its own traditions with the building blocks of cultural precepts from beyond the homeland. Architect and essayist Arata Isozaki, whom I interviewed while in Japan, wrote about this phenomenon in a 1996 book titled “The Island-Nation Aesthetic.”

Noting that the religious, aesthetic, and linguistic modalities central to Japanese thought were largely adapted from elsewhere in East Asia, Isozaki further observed: “Forms and techniques seen in Japanese products were originally imported from the outside world — Korea, China, and the West — rather than home-grown in Japan. What was first imported was then transformed into ‘Japanese things’ by the mechanism of sophistication, adaptation, and alteration.” Unlike isolationist movements, then, the island-nation orientation transmutes adapted motifs into springboards for innovation.

This modus operandi — adaptation, integration, innovation — was on clear display at the Yokohama Museum of Art, the Triennale’s main venue. Some artists took a literal approach to the island-centric theme, among them the artist duo known as MAP Office, who commandeered a plywood staircase in the museum’s central courtyard and appointed it with miniature islands, plastic palm trees and bikini-clad figurines. Others, more compellingly, took a conceptual tack. In Prabhavathi Meppayil’s “yt/forty-two” (2013), copper wires overspan a corridor, connecting one side to the other in a celebration of symbolic linkage. Anne Samat’s “Tribal Chief Series” (2015-16) combines heterogeneous elements — yarn, rakes, brooms, trowels, faucets — into wall sculptures that reference Native American patterns. Kawakubo Yoi’s 2017 photographic diptych depicting the Straits of Gibraltar commemorates the confluence of European and African cultures, staring one another down across a mere 8.9-mile gap.  Meantime, Ian Cheng’s “Emmisary Forks at Perfection” (2015-16) combines disparate technologies (computer animation, video, interactive algorhythms) into an oddly touching narrative about wolves and humans living in relative harmony.

The show’s most forceful call-to-arms for collaboration over segregation is Wael Shawky’s “Cabaret Crusades III: The Secrets of Karbalaa” (2015). An inspired gesamtkunstwerk of puppetry, costume design, film, drama, music and history, the two-hour-long production envisions the Crusades through Islamic eyes. Shawky deploys hand-blown glass marionettes as players in the saga, and although there are more than 150 of them, each puppet has a preternaturally individual visage. Moreover, the faces range a gamut of ethnicities and species; many are modeled on animals and fantastical creatures drawn from Shawky’s imagination. It’s astonishing to watch such a panoply of artistic disciplines operating in synergy as they chronicle religious wars that were waged to obliterate the possibility of coexistence. In an art ecosystem increasingly defined by multiculturalism and digital collaboration unbeholden to geopolitical borders, Shawky delivered perhaps the Triennale’s most urgent message: “My way or the highway” only clogs the highway with fleeing émigrés. To bring about positive change requires a team with pluralistic outlooks and skill sets — a constellation of compatriots, not a committee of one.