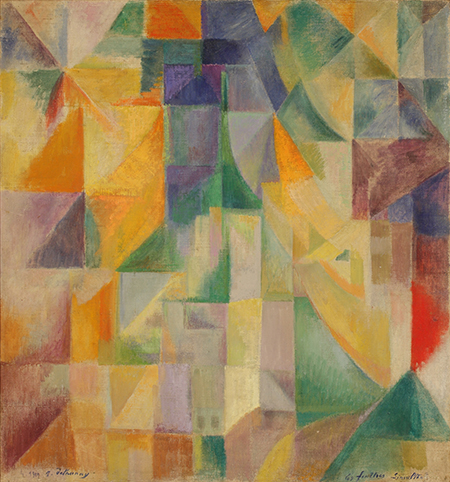 All of the major Seattle art museums were privately founded by three wealthy, influential and civic-minded men: Horace C. Henry, who gave the University of Washington the state's first art museum in 1923; Richard E. Fuller, who built, directed and paid for the Seattle Art Museum from the day it opened in 1933; and Charles Frye who, with his wife Emma, created the meat-packing fortune that opened the museum bearing their names in 1953, a decade after their deaths. All three men had already amassed substantial private collections before the buildings opened, therein to deposit their treasures.

That brings us to Paul Allen, the Microsoft co-founder and billionaire art collector, part of whose private family art collection, "Color and Pattern," is on view at his periodic personal art museum, a repurposed Buick showroom called Pivot: Art+Culture. For visitors to Seattle this summer, it should be a must-see stop. For locals becoming accustomed to Allen's increasing generosity toward the visual arts (he funds the Seattle Art Fair), it is another chance to see the mind of a collector at work and to ask two questions of long-standing interest: (1) to what extent do the selections reflect the collector's status as a legendary technological visionary who also has an interest in science fiction and professional athletic teams? And (2) when will a separate stand-alone Allen art museum be announced, built and opened? Since he has spearheaded the development of the entire South Lake Union area, where Pivot is located, all the pieces could be in place for something enduring and just as visionary as Allen's Frank Gehry-designed Experience Music Project building (with its inner Science Fiction Museum) next to the Space Needle.

The virtual embarrassment of riches in "Color and Pattern" is so acute that certain hitherto publicly unexhibited masterpieces could go uncommented upon or unnoticed. Mind you, Vulcan curator Greg Bell has written some of the finest art-historical wall texts I have read in years. Similarly, his design and layout to stress cross-artist comparisons within each gallery is brilliantly conceived, and might still be improved upon if there were twice as much space available. A generous Fort Worth-style space, monumental and modern, would be exciting, and surveys of such masterpieces would gain further stature in their own permanent home.

And talk about surveys. Fifty years ago, one couldn't conceive of a survey of early- and mid-century European or American art in any Seattle art museum collection, let alone the Russian, Belgian, British, Polish, Indian and Australian examples Allen has cannily and quietly acquired over the past two or three decades. The son of an Asian ceramics collector and another parent who patronized University of Washington art professors, like the Léger disciples Spencer Moseley and Wendell Brazeau, Allen's taste was already advanced when he became able to afford major, museum-quality works. Examples include Robert Delaunay's "Les Fenêtres Simultanées (Simultaneous Windows)" (1912); Wassily Kandinsky's very large "Deep Brown" (1924), and "Yellow over Purple" (1956) by one time Portland resident Mark Rothko (he never returned after completing high school and departing for Yale University).

The abundance of museum- or art history textbook-quality holdings fall into four or five loose groups, so historically oriented is Allen's ken for great art. The early moderns like Delaunay and Kandinsky are joined by midcentury followers like Rothko, Sperry, Sam Francis (whose first show was in Seattle) and Agnes Martin. Her untitled horizontal-band acrylic (ca. 1999) in the collection faces the new century with quiet fortitude and grace.

Jasper Johns and Robert Natkin anchor the second group, strange bedfellows at first glance, but bound in their allegiance to simple shapes and complicated grounds. Natkin has never looked better (much of his other work has dated badly), but is eclipsed by Johns's forgotten masterpiece, "Little False Start" (1960), the unknown afterthought and co-equal of the bigger, legendary "False Start" (1959). With actual collage elements embedded in the pigmented encaustic, Johns slows down the agitated brushwork of the New York School he was so good at skewering. The emotion of the then dominant aesthetic is completely controlled and contrived to aesthetic effect.

Johns and Natkin are followed by conceptual painters and sculptors like British artists Damien Hirst and Anish Kapoor, as well as Americans Spencer Finch and Tomory Dodge. Viewers can contemplate curator Bell's juxtaposition of Philip Taaffe's "Cape Zephyr" (2006-2007) and aboriginal artist Johnny Tjupurrula's Untitled (2000). One encapsulates indigenous forms in totemic compositions; the other turns sand-painting into a red synthetic resin field. Which is the colonizer and which the colonized? Raising such questions, the Allen collection has carved its own prestige niche as a collection without a museum.