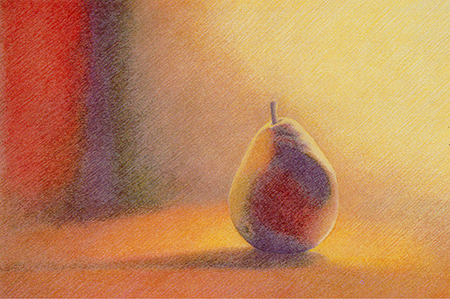 Along with our current imperative for political art, let us not forget that spiritually meditative or uplifting art can also be a viable vehicle for getting us through tumultuous times. In her color pear drawings of the early 1980s, Martha Alf introduced a noteworthy model for this contemplative genre that is as relevant today as ever. Now in her 80s and somewhat reclusive by necessity due to health issues, Alf remains an ongoing presence inhabiting conversations related to these topics that I find myself engaged in with new generations of artists.

Eric Johnson, whose solo exhibition "heart sequential" was on view in February at Scape in Corona del Mar, told me recently that Alf's pear drawings significantly changed the course of his artistic development. In his artist's statement, Johnson writes that Alf inspired him, "by way of her unwavering commitment toward a huge series of work that explored still lives of pears," to dedicate himself to the exploration of serial imagery. In another conversation, with Tommy Hopkins, a millennial artist and arts educator based in San Antonio, I discovered that Alf's pear drawings were well known to him through reproductions in college textbooks.

Alf began exhibiting black-and-white drawings of pears and other fruits and vegetables in the late 1970s. With compositions staged like theatrical psychodramas, each pear or other edible object assumes the role of an actor in an emotional encounter. To add a sense of foreboding, Alf covered the entire surface of each composition with diagonal striations, all drawn freehand, that yield the effect of a metaphysical light. For this reason, her black-and-white drawings have often been compared to the still lives of Morandi and, although the black-and-whites are perhaps the best known of her pear drawings, it was in a subsequent body of work from the early 1980s that Alf's work began to convey a heightened sense of spiritual awareness.

Prior to Alf's mature work, spirituality was well established as a topic of vital interest to Los Angeles artists: there were the 50s era Beat artists, the Light and Space Movement and Finish Fetish. The Beats, of course, were heavy into mysticism, with Wallace Berman having been influenced by the Kabala. Light and Space was all about Zen or the more contemporary notion of mindfulness: immerse yourself in the moment and maintain a heightened alertness of your surroundings. And pay attention to light, because that's where you might find divinity. Finish Fetish brought a pop culture spin to this idea, permitting us to relish the beauty of light reflecting off cars and surfboards.

Although the Light and Space artists primarily worked with objects and installations, the interest in heightened sensibility to the presence of light was not limited to this group.  It was Alf's color pear drawings, in fact, that helped me understand the Light and Space aesthetic. At her 1981 exhibition at Newspace, the black-and-white drawings had given way to color, and the theatrical stage had been replaced with an infinite space. In new drawings where radiant rays of warm colors bathe and saturate a solitary pear, Alf's stand-in for the self, I was reminded of Caspar David Friedrich's "Woman at a Window" (1822). In relating to that work, we as viewers can empathize with a woman who stands with her back to us, finding her spirituality by looking at light through a window. A cross structure in its upper section serves as a restrained reference to God (this was, after all, the early 19th century). Echoing Friedrich's woman, Alf's pears were by the 1980s at one with divinity, represented through porous colored light.

As Alf continued her work on the series the following year, the L.A. art world was saddened by the untimely death of one it's very talented young Turks, Andy Wilf, who was only 32 when he lost his battle with substance abuse. In Alf's drawing "Pear #1 (for Andy Wilf)" the pear persona stands in for Wilf. As the pear stem in the drawing is pulled magnetically towards the almost blinding atmosphere of golden light, I am reminded of the similar force of Adam's hand reaching towards that of God's in Michelangelo's Sistine Ceiling. Using a representational and aesthetically splendid visual vocabulary, Alf brought a unique and compelling approach to envisioning a bonding between a human being and divine light. It's a vision that retains freshness and relevance more than 35 years later.