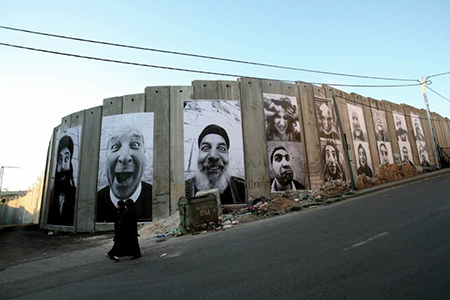 Art critic John Seed's recent (March 1, 2017) article on Huffington Post is headlined, with thoroughness worthy of a Turner title, "In a Time of Political and Spiritual Repression, Must Art Become More Political? Not Necessarily…" Seed takes issue with the idea that artists confronted by the collapse of civil democracy under the Trump regime — part of a global rightward tilt, America not being quite as exceptional as it thinks — have a duty to make protest art.

One can hardly object to artists joining to save the country and the world, but making this mandatory practice is a big mistake, if one cares about art as a field of independent inquiry, amenable to serious attention and not just the handmaiden of politics, or fashion, or religion (all of which it has been historically, with mixed results). Seed considers such moral imperatives, whatever we think of the causes, "both well-intentioned and misguided." I agree, wholeheartedly, and maybe paradoxically, while reiterating my support for artists' freedom to choose what subjects to interpret and how to treat them.

Seed: "I see visual artists — the group that I write about — as mediums who bring us glimpses of the world through the filter of the self … when individual artists feel obligated to respond to a collective set of demands there is a kind of flattening that takes place … the result will most often be dull, didactic art."

On the other hand, political outrage — when channeled through the sensibilities of strong individuals — can certainly generate great art. The power of unfettered individual expression — the natural opponent of authoritarianism — is what makes Picasso's iconic "Guernica" so memorable. Picasso's personal antipathy to Francisco Franco and to the terrifying form of modern war he sponsored is what gives "Guernica" its authentic sense of outrage.

Picasso's passion — or Passion, for what is "Guernica" but a secular version of the indictment of wolfish inhumanity? — does indeed resonate powerfully with us, almost a century after the Spanish Civil War. So do Goya's depictions of the Napoleonic wars, two centuries later. What makes them timeless artworks are the artists' commitment and talent, and not necessarily the enormity of the crimes depicted, which speak for themselves to anyone with a moral backbone.

The prizewinning photograph of the gunman who killed the Russian ambassador in Turkey got a lot of internet attention. This may have been in part for its resemblance of a nicely framed movie still, a well composed snapshot of a horrific crime, straight photojournalism. Still, it was seen by many Americans, rather appallingly, as art or entertainment. Had the victim not been a middle-aged Russian, but, say, a young child, or the familiar slim young blonde, we might have gotten more exercised about the triumphant pistol brandisher who later shot himself.

Speaking of bad art, Picasso's later attempt to redo "Guernica" — from a Communist viewpoint — fails miserably: the form language so charged with feeling in 1937 becomes rhetorical and empty in his 1951 "Massacre in Korea." It's nothing more than academic cubo-expressionism, a heavy handed quote of Goya's magnificent prototype, "The Third of May 1808," plus more than a hint of Matta's Surrealist robot aliens of the 1940s. More recently, Ai Weiwei posing as a drowned Syrian child also fails as art to my mind.

But wait, you say: are we not aestheticizing horrors? Yes and no. An aesthetically successful work uses form and color to express content — powerfully or beautifully or amusingly, as the case may be. Artists succeed when they transmute content into memorable and unforgettable form. Form is the shape of content, as Ben Shan said. If viewers are asked, nay, blackmailed into approval for reasons of political correctness, they have not had an aesthetic experience, but an anesthetic or even sentimental one, if you define sentimentality as manipulating audience's reaction without earning it.

Seed concludes with this telling anecdote: "During the horrific political events of World War I, the artist Claude Monet was working in his studio at Giverny, where he could sometimes hear the explosions of shells not far away. He was creating his magnificent cycle of Nymphéas (water lilies) … 'Most of my family has left,' he wrote to a friend during this period. 'A mad panic has seized all this area. As for me, I'll stay here all the same, in the midst of my canvases, in front of my life's work.' … By doing so, he gave us masterpieces that still resonate healing power."

Artists, know where your talent lies, and be leery of jumping on bandwagons however morally compelling; you can oppose the evil of the world in other ways as well. If you do choose to man the barricades, as is your right. However, watch out for the siren call of heated, empty rhetoric. Your art may achieve an immediate impact as propaganda — and much very great art is propaganda, and sometimes more — but it may not outlive its day.