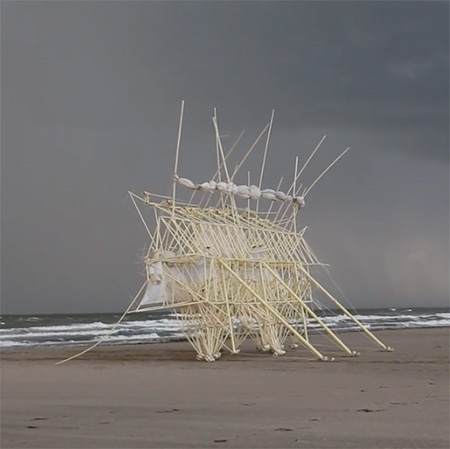 "Plastic tubes entered my life in 1990 on a fine September day. Since then, the beach animals have ruled my life. It became an addiction, a disease if you like. It's a virus that refuses to leave my body. I am a victim. The beach animals are forcing me to make them. I'm happy but utterly dependent. The animals and I live in symbiosis. We profit from one another. They give me a place in this world. I earn my living from them. In their eyes I'm just a pile of protein molecules, an unresisting victim."
—Theo Jansen, "The Great Pretender," p. 191

In today's pluralistic art world, everything is allowed and nothing forbidden, all earlier preconceptions about beauty, meaning and power having succumbed to the dictates of creative freedom: there are constituencies for everything, but very little general consensus. Exceptional in terms of his wide acceptance is the Dutch artist, or, rather, artist-engineer-philosopher, Theo Jansen, whose "Strandbeests," wind-powered, ambulatory beach creatures constructed from low-tech, hardware-store materials, exercise a mysterious fascination on all who encounter them, either through online videos or in the flesh, so to speak. Six of Jansen's zoomorphic mechanical progeny are now on exhibit at San Francisco's museum of art and science, The Exploratorium [through September 5—Ed.]. I first saw and was hooked by Jansen's videotape, "Artefauna" a dozen years ago, so was thrilled to learn that his sand-striding critters would be coming to San Francisco. Once here, these ungainly but intricate contraptions were organized for a breezy stroll at Crissy Field, near the Golden Gate Bridge, surrounded by windsurfers — very San Francisco, although the winds were irregular and not within the optimal 12-18 mph range.

Their self-deprecating, obsessive creator sees himself as an expert in self-deception. Jansen jokes that he is the slave and executant of the "Strandbeests" (as are all those infected by the virus, dear reader). On February 24, 1990, Jansen, a regular contributor to De Volkskrant newspaper (despite his having caused a near-riot in 1981 with his mysterious UFO hovering over Delft), posited in an article entitled "Strandlopers" (Beach Roamers) a method of combating rising sea levels threatening The Netherlands: "There really should be animals on the beach that are permanently engaged in loosening sand in large quantities and throwing it into the air so that it can blow onto the dunes." He had already designed a transverse beach roller and a dune digger, and would be constructing and testing them in the summer.

This was the beginning of a project that would occupy the artist from then on, resulting in the creation of almost forty kinetic sculptures, robots made by hand without electronics (with some computer assistance for the design of the insectile segmented legs in prescribed "holy number" proportions), from plastic electrical conduit, water bottles, vinyl tubing, nylon string, ball-bearing grease, and shower gel. The Exploratorium's Marina McDougall: "Jansen is animated by a grand, seemingly impossible ambition of animating the humble material of PVC into herds of creatures that move on their own and can be replicated." Jansen's humorous family tree shows the lineages, with large evolutionary periods shaped by technical discoveries, named, like the Linnaean system of biological/botanical nomenclature, in Latin:

The "Strandbeests" on display, all designated Animaris, a Latinism combining animal and sea, include "Animaris Excelsus" (2006; outfitted with brains, wind-tank stomach, wings, and hammer); "A. Umerus Segundus" (2014; 42 feet long, with a nervous system, sweat glands and wind stomachs); "A. Ordis" (2006; filmed for a BMW commercial, and, "an opportunist, exploiting wind and human power," amenable to being walked by compliant visitors); "A. Suspendisse" (2014); "A. Apodiacula" (2012-13; with outrigger buttresses to prevent toppling by strong winds); and "A. Adulari" (2012; with water-detecting nose and sweat glands that wash sand from joints).

Lawrence Weschler concludes his wonderful essay, "Don Leonardo Quixote of Den Haag" (included in Lena Herzog's photo book, "Strandbeest: The Dream Machines of Theo Jansen") with an account of Jansen testing a new design for a creature's nose which would, employed along with an air-driven hammer, pound stakes into the sand, enabling the "Strandbeests" to better withstand the region's "damn autumn squalls."

Theo patted his Beest's snout with evident pride, breaking into another smile. "I really think we're going to make it, though, " he concluded. "We're almost there. All I need is another 20 years."