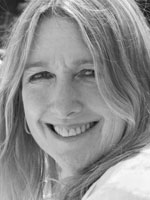 It was Bean Finneran's "Eureka!" moment. As she approached her fiftieth birthday, she took a long look at her past and present. From her roots in avant-garde theater in Boston and San Francisco, she had grown into an entrepreneur with a successful jewelry design business, but now she found herself at a crossroads. Either she could invest all her time and energy into growing the business or she could go back into her studio and make art. She opted for the latter and began painting, albeit without much satisfaction. "I couldn't come up with any kind of personal statement as a painter," she recalls, "so after awhile I decided to start working with clay again. I had never formally studied ceramics but thought I would just bumble my way through."

In her studio--which is sited off a boardwalk at the edge of a salt marsh in Marin County, north of San Francisco--she began rolling up thin sheets and coils and firing them in the kiln, not knowing what she would do with them. As she finished each batch, she placed the cylinders on a pedestal, "but they kept rolling all over the place..." To remedy the problem she started making tiny twists in the next coils. This subtly curvilinear form, organic and pleasing to the eye and hand, resonated with her. As she laid them down on the pedestal, then outside on her deck, they began to pile up, and the negative space between them took on intriguing contours. Soon, what began as a jumble became a composition. "A friend of mine came over and looked at them," she recalls, "and she told me, 'You ought to keep going with that!'"

And she did. In the decade since, beginning with a debut exhibition at Braunstein/Quay Gallery in San Francisco, she evolved her happy accident into site-specific installations of startling complexity and beauty, in Europe, Asia, and the Americas. What started as intimate works of 300 or 400 coils evolved into pieces that reach up to 30 feet long and contain up to 70,000 coils, each of them hand-rolled, -fired, and -painted with acrylics and glazes. Her February show at PDX Contemporary Art in Portland will feature her signature forms, which evoke, but do not replicate, sea creatures, nests, and wreaths. She will also exhibit a series of drawings, never shown before in Portland. Other recent stylistic developments include work made with photographic prints and hand-glazed manufactured bricks.

Finneran says she finds constructing the intricate works "repetitive and meditative" but not tedious. Still, they do present challenges. For example, the coils are not glued or adhered in any way; they derive their structural integrity solely from gravity and the strength of their interwoven compositions. They can be knocked over, as happened, quite spectacularly, when a child barreled into one during an opening at the Nancy Margolis Gallery in New York. In addition, if the artist doesn't like how a completed piece relates to other pieces in an exhibition space, she has been known to completely disassemble and reassemble the work a foot or two away from its original placement, a process that can add a day or more to installation.

But these challenges and the obsessiveness they demand are part and parcel to Finneran's method. She has resisted suggestions to create permanent sculptures because such permanence would preclude "the absolute possibility of transformation," which she finds essential. To her, the time-intensivity and steady-handed high-wire act of creating and installing these works recalls her years in theater. "Both are about arriving in an empty space and putting something together for a limited period of time," she observes."And in both, you have a sense that you're not totally in control. I think that's a wonderful thing."

Bean Finneran's work can be seen this winter at PDX Contemporary Art in Portland, from February 2-27, 2010.