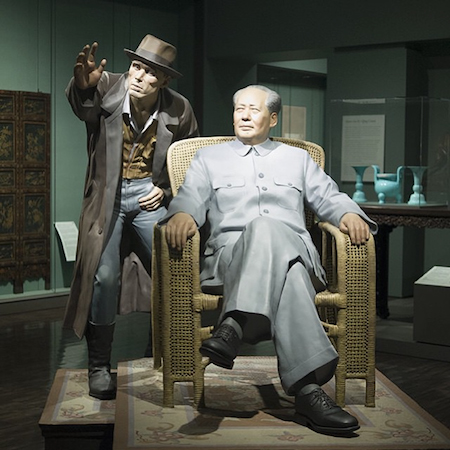 "We intend to glorify war — the only hygiene of the world — militarism, patriotism, the destructive gesture of anarchists, beautiful ideas worth dying for, and contempt for woman ... We intend to destroy museums, libraries, academies of every sort, and to fight against moralism, feminism, and every utilitarian or opportunistic cowardice."
— Excerpts from The Founding and Manifesto of Futurism, F.T. Marinetti, published February 20, 1909

The Chinese conceptual artist and political dissident Ai Wei-Wei was in the news again this week, with a trio of provocative items — and who does provocative better than he? First, there’s an exhibition of mythology-themed works at Le Bon Marche Rive Gauche, a fashionable store in Paris. Second, Ai took and broadcast selfies taken with Paris Hilton (no revolutionary, in anyone’s eyes) in the store. And, third, Rohit Chawla photographed Ai, lying face down in the sand (in the planking position) for one among He Xiangyu’s ultrarealist sculptures recently shown in "28 Chinese" at San Francisco’s Asian Art Museum), exactly mimicking last fall’s heartbreaking image of the drowned Syrian toddler, Aylan Kurdi, a refugee victim of Syria’s civil war.

Ai’s political sincerity and  courage, demonstrated time and again, almost at the cost of his life and for a time his freedom, are undeniable; but would it be fair to question his judgment about the boundaries of the personal and the political? Showing art in a fancy department store is hardly worth righteous indignation; one might contend that art celebrating Chinese folklore, if not ostensibly political, at least serves the cause of international understanding. Posing with Paris, in Paris, similarly, is not really worth calling down airstrikes of PC outrage. However, exploiting — one might almost say, parodying — a poor drowned kid sticks in the craw. Many on the artistic left will assert that Ai’s photo op helps keep visible the truth of the refugee crisis, and there’s undoubtedly some truth to that, whatever it actually accomplished beyond that. But could it not have been done otherwise: in better taste?

Bad taste almost amounts to, in today’s political culture, a mark of authenticity. But the political right has something in common with the political left. For the past century, outlandish bad-boy behavior has been often equated with revolutionary cultural importance. If the destruction of the World Trade Center towers was called, by the composer Stockhausen, "the greatest work of art that is possible in the whole cosmos," do we accept his implication that it was dramatic, memorable and arresting, even beautiful (to audiences trained in Hollywood pyrotechnics)? That the loss of human life was aesthetically unimportant? Then it’s understandable that we rush these days to acclaim whatever new inanity or insanity comes down the artistic pike. Nobody wants to be a priggish, prudish Victorian, after all, but is not its utter opposite -- the giddy autonomic neophile -- just as absurd?

A century ago, the initiators of modernism fought against a complacently bourgeois, materialistic worldview. Some of these artists are rightly considered cultural heroes, and even champions of the human imagination and spirit. The case is much more complicated than that, of course. The Futurists, in their distaste for the backwardness of a pre-industrial Italy after the Great War, readily accommodated themselves to the crude totalitarianism of Mussolini's fascism. Plenty of German intellectuals in that nation of culture rationalized their way to supporting Nazism. Idealistic artists who supported the Communist revolution in their youth had leisure to repent during the years of Stalinist purges. In the ostensible bastion of democracy of America after the war, the myth of freedom embodied in Abstract Expressionism (America’s cultural triumph over exhausted old Europe) was successfully deployed for capitalist propaganda during the Cold War. Artists are as gullible and self-deceiving, even as conformist as the rest of us. Trust no one, however talented.

I recently came across Lionel Trilling’s characterization of George Orwell as “... an ordinary man, with an ordinary man’s values, exalted and magnified" (It’s in the foreword to “Homage to Catalonia,” if you’re interested.) Coincidentally, I stumbled over this similar appraisal of President Grover Cleveland in Wikipedia a few days later, written by historian Allan Nevins: "[I]n Grover Cleveland the greatness lies in typical rather than unusual qualities. He had no endowments that thousands of men do not have ... But he possessed them to a degree other men do not."

While we can’t all be super Joes like Grover Cleveland or George Orwell, we in the creative life should aspire to more than just good citizenship. We would do well to aspire, in this time of fragmented identities and tribal animosities, and huuuge challenges, to participating in democracy without sacrificing our values or our humanity. Does the bourgeoisie still need shocking out of its complacency, as the modernists believed? Yes, of course, but let’s know when to leave ourselves, wondrous though we may be, out of the impolitic picture. All politics is personal, but it’s also communal.