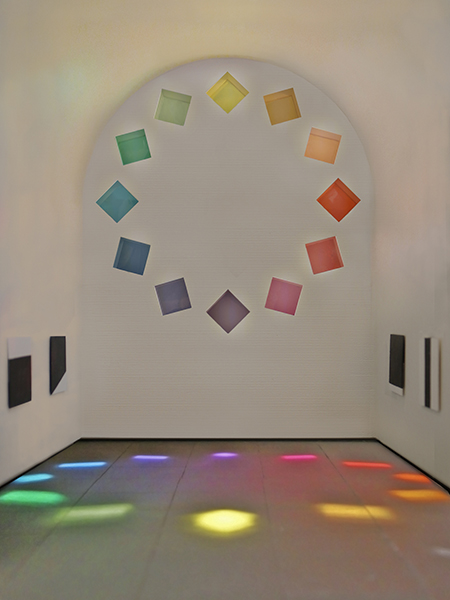 A few months ago, I made my first visit to Johnson City, Texas. Located in Hill Country, about 65 miles north of San Antonio, Johnson City is a small town with a population of just over 1,600. It is best known for having been home to LBJ. My reason for going there, however, had nothing to do with the former President. Rather, it was to see an installation by Wimberley-based artist McKay Otto at the Hill Country Science Mill, a new science and technology museum for children. For, in the unlikeliest of places, Otto has created a site-specific sanctuary, a quiet respite in a repurposed grain silo of a former feed mill that was built in the late 19th century. Called "The Silo of McKays," the installation uses Buddhist ideas to heighten awareness of light, sound, rhythm, balance, color and harmony.

Inside the “Silo," Otto positioned seven Tibetan prayer bowls on evenly spaced tables, with an abstract painting installed high above each, such that these tripartite units resemble altars. A minimalist abstract painter who was mentored by Agnes Martin, Otto typically creates grid format paintings through which meditative opportunities result from the subtle interplay between faint geometric structures and carefully chosen materials. In this particular series, the grids are composed of small groupings of vertical bars that vary in color and number per cluster from painting to painting, using a sequential system based on the seven Chakras. When the lights are turned off, geometric symbols associated with each Chakra, which appeared to the artist in a dream, emerge silhouetted within backgrounds of fluorescent paint. Additionally, docents are prepared to play the prayer bowls on various occasions.

Although Otto's installation is the most recent of this type to open, it is not the only public space  in Texas, designed by a visual artist, where one can retreat for solitude, reflection or inspiration. Since 1971 the Rothko Chapel in Houston has been open to the public for a similar purpose. More importantly, in what seems to be a growing trend that I would like to see expand, the University of Texas at Austin has taken laudable steps in this direction. In 2013, the university opened a James Turrell skyspace entitled "The Color Inside." Responding to a student request for a "meditation space" in the student activity center, the university's public art officials invited Turrell to design one of his characteristic installations with an open cutout to the sky. Approaching the installation is something like a pilgrimage, since visitors can exit the noisy student center by taking an elevator to the third floor and moving down a long corridor before accessing the rooftop boardwalk upon which sits the elliptical structure. Once inside, up to 25 people at a time can gaze upward at a view of the sky through an oculus. At sunrise and sunset, LED lights of changing colors activate the wall space surrounding the oculus, creating a mesmerizing perceptual experience during which strangers have been known to bond with each other as well as with the universe.

The second project, which will be part of the university's Blanton Museum of Art collection, just broke ground this fall. The only freestanding building to be designed by the late Ellsworth Kelly, it will be a cross-shaped stone structure with vaulted ceilings, geometric windows of colored glass arranged in circular and grid patterns, and a redwood totem for an altar. Entitled simply “Austin," Kelly envisaged it as a space for quiet contemplation. While working on the project with the university, the artist expressed his sentiments about the need for this type of facility in our conflicted times, and I couldn't agree with him more. According to Kelly, "I think people need some kind of spiritual thing, because, as you can see, there are spots around the world that are blowing up and we don't want that, no one wants that."

According to a new biography on Mark Rothko by his son Christopher, Rothko once told fellow artist Ethel Schwabacher that he dreamed of having small roadside chapels for his paintings throughout the country. Although he only got it started with the one chapel in Houston, other artists are now creating chapel-like spaces at sites around Texas in new and effective ways. More appealing perhaps to younger generations than organized religious facilities might prove to be, these artist-designed spaces provide non-denominational, secular avenues for communion with spirituality as a mental and emotional state, rather than as a doctrine.