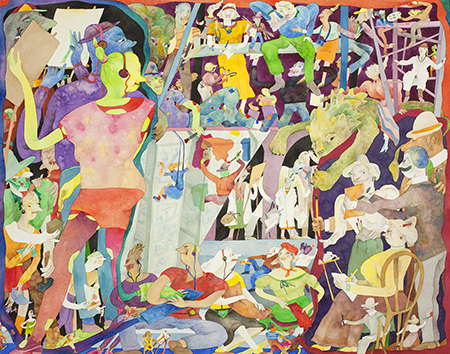 Gladys Nilsson, "Big School Picture: Little Paper Mural," 1992; a mini-history of the SAIC commissioned on the occasion of its quasquicentennial. Courtesy the Samuel T. Avery Endowment

(Yes!  Herein I set the all time Visual Art Source record for name-dropping!) The School of the Art Institute of Chicago was founded (originally as the Chicago Academy of Design) in 1866, and as this is, following the academic calendar, 2015-16, it has decided to start celebrating its 150th Anniversary. Already a few of the SAIC ‘s distinguished alums — Jeff Koons, Chris Ware, etc. — have come to glad-hand and give lectures, and many more will follow over the next year or so. There will be a couple of exhibitions at the SAIC’s Sullivan Galleries and at (and this really infuriates the curators there when I teasingly say this) the SAIC study collection.

OK, that’s all fine and dandy. I wasn’t around the SAIC in 1866, but I was teaching there by 1991, which marked its 125th anniversary year, which is (and don’t say you never learned anything from VAS) called a quasquicentennial.  That year, with Neal Benezra, I helped organize an exhibition of alums that had two components, a smaller exhibition called “From America’s Studio: Twelve Contemporary Masters” held at the AIC; and a larger show, “From America’s Studio: Drawing New Conclusions,” presented at the school’s Betty Rymer Gallery.

Or have we? Taking credit for your alumni can be a tricky thing, and while trotting out your distinguished alums is a game all art schools and universities play, it can be a confusing and misplaced project. Instead, the key attitude might be that while it’s fair for an institution to take pride in enumerating their graduates, it should never even appear to take credit for their subsequent accomplishments. It’s interesting that Koons and O’Keeffe and Paschke and Tiravanija attended the SAIC, it gives you an aperture into their origins, you know they spent time in Chicago, you can visualize them young and unknown, strolling Michigan Avenue. But really, they would have achieved more or less the same careers had they attended RISD or CalArts or Carnegie-Mellon instead. I hate mumbling platitudes, but the old standbys — “we don’t make artists, we foster creativity,” “we provide an environment where young artists can to the fullest explore their potential,” “we’re a cultural laboratory where experimentation is encouraged,” “we’re about meaning and making” — are actually pretty much true. The School possesses a peculiar environment that might have given those who went on to distinguished careers more than the usual nudge toward the path ahead.

It’s a highly competitive place, in a blue-collar Midwestern way. There’s no sense of art stars (well, maybe a bit among the faculty, but that’s another story) or heir apparents, but instead an attitude where it’s put up or shut up, particularly at critiques. We don’t coddle, we challenge, and that’s good preparation for what happens after graduation. We’re a big school, lots of options for interdisciplinary wandering. I’m always pleased when a grad student in ceramics decides to make videos for a semester. The presence of the museum across the street is very helpful, it’s remarkably intriguing sometimes to stop class in the middle of a discussion about Picasso or Richter and just cross Michigan Avenue to look at rooms filled with their work. It can be, for the right students, such an immersion into art, culture and contemporary thinking about them both that they are raring to go upon graduation, and through their efforts bring credit back to us.  I wish I could be here in 2066.