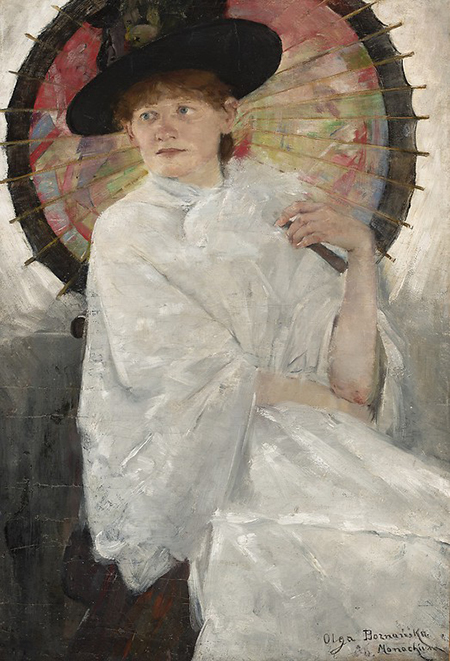 Olga Boznanska, “Portrait of a Young Woman with a Red Parasol,” 1888, oil on canvas.

Two national museums in Warsaw and Kraków have dedicated curatorial departments and galleries to 20th and 21st-century art. Together they make it worth visiting both Polish cities, as I did recently, as much to witness that country’s slow climb back to cultural relevance as to ponder cultural achievements made against the headwinds of multiple historical abuses. With European Union money flowing into Poland for various entrepreneurial and infrastructure projects, it is disappointing that neither museum has been noticeably upgraded or, better, replaced with modern, climate-controlled buildings. The 20th-century permanent collection catalog at the National Museum, Warsaw, has been out of print for some time with no plans, according to a museum shop employee, for updating or reprinting. This makes visits there difficult for those who are largely unfamiliar with modern Polish art. Lighting is poor, floors are dirty, and labels are not translated into English or any other languages.

What was modern art in Poland, considering many Poles do not even consider the 1939-1989 period a time when they would call the country “Poland”? The German-Nazi occupation (1939-1945) was followed by the Russian-Soviet occupation (1945-1991), and cultural programs were abruptly changed in both cases. For example, I learned that at the venerable porcelain china tableware factory, Cmielow, figurines of Polish patriots from the interwar period (1919-1939) were replaced with commissions from the Nazis for a young shepherd on a mountain — an ashtray. Similarly, under the Soviet occupation, a sturdy miner emerging from a mine shaft became another ashtray.

Painting and sculpture are more complicated. Up until 1939, Polish art was part and parcel of the European, i.e., French avant-garde. Not a real diaspora, because many of them returned home, these artists brought to Poland, from the late 19th century onward, innovative ideas ranging from Impressionism and Symbolism to Cubism, Expressionism and Surrealism. Between 1939 and 1945, everything was shut down in terms of outside influences, not to mention the numerous Jewish artists who had brought great acclaim only to be exterminated in nearby concentration camps of the Third Reich.

After 1945, with “democratic" elections rigged for the Soviet takeover, art shifted to Socialist Realism, some of which remains on view in both museums.

Curators are belatedly trying to draw attention to various aspects of Polish modern art previously overlooked. In Warsaw at the National Museum, “Pope of the Avant-Garde: Tadeusz Peiper in Spain, Poland and Europe” chronicled the collector, lawyer, and progressive magazine publisher who spent time with the “Ultra” group in Spain, as well as the “Formists” and “Futurists” in Kraków. Between 1915 and 1920, Peiper was part of an unknown Polish group in Madrid that also included Robert and Sonia Delaunay. In Poland, he founded the magazine “Zwrotnica” with artists who were close to Malevich, Gris, Léger and others.

The National Museum, Warsaw, has stronger early 20th-century holdings which highlight, for example, the important (she was recently honored with a retrospective) Olga Boznanska who was like Mary Cassatt, but much bolder, with a vivid color sense. Wojciech Weiss’s “The Demon” (1904) deals with an absinthe-drinking couple. Leon Chwistek founded “zonism,” his version of cubism. Jonasz Stern painted “Nude” (1933) in a high-cubist style that seems fresh 82 years later. He and a number of other artists were included in “Jewish Artists in Kraków 1873-1939,” a huge omnibus survey at the Museum of the History of Old Kraków in 2008. Women artists were unusually important during those years.

In the Kraków museum, the holdings of the post-1945 period are more revealing than in Warsaw. This was a terrible period, notably evident in the World War II and Holocaust memorials designed in tendentious Socialist Realist style. Optical art is represented by Wojciech Fangor, who left the country for New York in the late 1950s. Particularly appalling is the 1949 “Child with Killed Mother” by Andrzej Wróblewski, in which the mother’s gray corpse appears to be standing up (without head visible), gruesomely reaching for her small son who is attempting to embrace her. The mother is wearing a blue strapless dress.

Poland was a country ripped in two, or even three, parts throughout the past 300 years. With the 20th century a time of horror but also deliverance, double totalitarian masters followed by saintly liberation, the nation’s artists who did not flee to Paris, London or New York suffered greatly. Their works deserve greater respect in terms of museological display, scholarship, and attempts to bring their art to a greater audience. Many of the artists on view at these museums deserve such recognition; some simply do not merit exporting. All are worth seeing in Poland to gain a fuller idea of what modern art was in all its breadth. Thankfully, neither the Nazis nor the Soviets were completely successful in killing it.