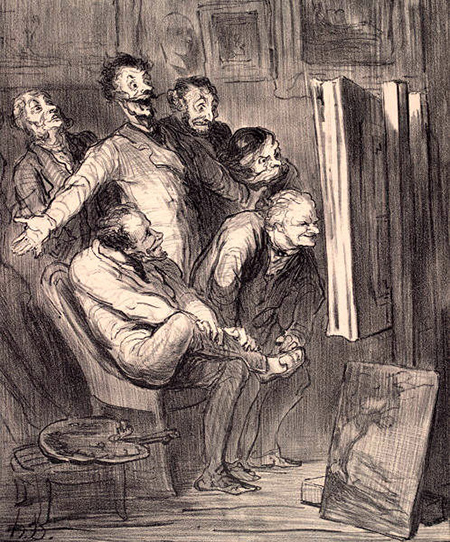 In 2012, the veteran art critic Irving Sandler posed fourteen questions to art-critic colleagues. I have been responding to them in this space over the last few years, coming now to Question 12: How do art magazine policies affect art criticism? First, a disclaimer. While I have written for a number of magazines (as well as newspapers and websites), I occupy the journalistic/critical side, not the editorial or marketing/advertising side. My thoughts about art magazine policies, therefore, are supposition, but, I think, plausible. In addition, I have some observations about the artist-critic nexus.

1. “It’s about everything we got into archaeology for,” said Indiana Jones’ mentor in "Raiders of the Lost Ark." All of us involved in art writing got into it from a passion for art, tantamount sometimes to an obsession. We’re like artists in that we have chosen to make sacrifices in order to pursue our passion in a field of uncertain and limited financial return. In Clement Greenberg’s day, in the 1940s and 50s, critics were paid perhaps $5 for a review; probably with inflation, the figure today is roughly approximate. Despite the stereotype of the monocled aristocrat-aesthete, most writers are of middle-class origin. Nobody gets rich strictly from writing about art, it is typically an honorarium that supplements rather than supplants remunerative ancillary gigs: teaching, writing catalogue essays, consulting, etc.

2. Art magazines, despite the enthusiasm of all involved, are nonetheless business ventures. It will shock nobody to learn that publications need ad revenues, so magazines are rarely in a position to be adversarial with respect to the market; they’re very much part of it, providing art-historical legitimacy to new art in some cases, or championing new forms of expression in others. Galleries that do not buy ads cannot necessarily expect the same treatment accorded to galleries that do (although editors do commission reviews of non-contributory venues on their merits if they are serious). It’s unfortunate that nonprofit venues like university galleries and the smaller museums typically receive proportionately less coverage due to the financial pressures. From the 1960s until a few years ago, “Artweek" reviewed these venues pretty consistently, but it folded after a forty-year run in the Bay Area, partly because of that laudable generosity. Nowadays, art bloggers occasionally cover these venues, but such coverage, frequently dependent on personal relationships, is spotty. A corollary note to curators: inviting writers to see your shows is fine, but know that reviewing a group show with, say, forty artists takes lots of time and effort to do properly, a daunting prospect in usually limited word counts. Be realistic. A related note to artists: yes, your relationship with art critics is fraught with contradictions: you bravely don’t care what we think, but still want our attention. Do not insult us stupidly because of your issues with authority. Be consistent (no love-hate, please) and comport yourselves respectfully, collegially, and professionally if you expect the same — especially online, where the whole world is watching, no?

3. Art magazines provide both journalistic coverage of “breaking news” and critical perspective. These are antithetical goals, so writers and editors seek to achieve a balance — not always perfectly, of course. Readers — especially younger artists — should know not take anything in print as gospel, nor should reviews be reflexively dismissed. (Critical thinking’ is not in fact the uncritical, unthinking acceptance of professorial prejudices.) No one review is definitive, even given differences in quality of writing and content, so take criticism in stride. Don’t kid yourself into thinking you want genuine criticism if it’s really public praise you crave. Question reviews, certainly, but from a position of knowledge and self-knowledge. Most art writers eschew snarkiness and work hard to make their criticism thoughtful and constructive. Meta-critics, you should, too.

4. G.K. Chesterton, in one of his "Father Brown” stories, compared the artist to the criminal and the critic to the policeman. Whatever critics write about your work becomes part of your rap sheet (or permanent record). Most of us, when reviewing exhibitions, will take the time, deadlines permitting, to read other critics’ takes. It usually does not substantially alter what we think, but we get a fuller picture of a career. I like to quote other critics when appropriate, although some publications prefer that I speak ex cathedra, authoritatively. From time to time artists ask if they can quote a past review. Absolutely! That’s a legitimate part what we’re here for. Glad to help, and if you’re not using them, I/we want to know why not.