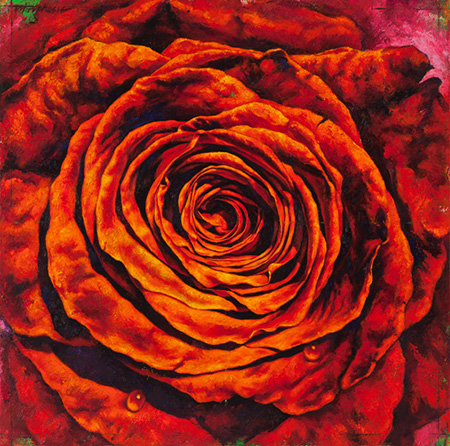 Jim Morphesis' work, currently surveyed at the Pasadena Museum of California Art, navigates the difference between artistic solipsism (what J.J. Charlesworth recently called the "narcissistic expression" of "ego-centric" art) and the use of painterly expressionism in the quest for Self (that is, self in the larger sense). This difference can be articulated in psychological terms as the distinction between the ego that is one’s separate, culturally constructed identity; and the Self, that part of you that remains unified with the whole. In order to address the latter, Morphesis turns to subjects that have had symbolic resonance for hundreds of years: the Crucifixion, the Pieta, torsos, skulls, and — most recently — roses.

In painting, the self/Self difference often manifests as the distinction between abstraction and figuration.

Morphesis began his career as an abstract painter, creating thickly textured monochromatic panels that could be read as abstracted icons or altarpieces. "Could be read" is the key phrase here: Although many viewers found the works powerful and even spiritual, others failed to recognize the poignant religious allusions of the artist's early abstract work. When Morphesis turned to figuration — importantly, to the symbolically significant vanitas subjects he chose — he rejected loosely variable interpretations in favor of specifically resonant content.

Many classical paintings of the Crucifixion and Pieta were created to connect worshippers with the suffering Jesus endured on the cross and the anguish Mary felt at the loss of her Son. (By extension these specifically Christian subjects referred to physical suffering and loss in general terms.) Skulls, which often appeared in memento mori depictions, were painted to remind viewers of the inevitability of death. Awareness of the transient nature of life lies at the rhetorical center of this tradition.

Art historian and curator of the exhibition Peter Selz [see Matthew Kangas’ recent interview with Selz for the Weekly Newsletter—Ed.] asserts that Morphesis' figurative paintings are "cathartic" in the manner of Greek tragedies. These seductive paintings draw us in, then demand that we contemplate the physical and emotional traumas that mark us with the "wounds of existence." Morphesis' work allows us to experience, purge and perhaps better understand powerful, shared feelings. They become paths along the quest for the Self.

As a teacher of non-art-major students at a state university, I am painfully aware that the general public still looks at Jackson Pollock's work and thinks, "That's not art!" or, worse, "That's a completely ridiculous. Who does he think he's fooling?!" To the degree they are aware of her, these same folks think Joan Mitchell's paintings are good only if the colors are pleasing. However cathartic the creation of Pollock's and Mitchell's works were for the artists, they do not communicate readily with many viewers. The general public simply doesn't "get" that visual records of a hand-held brush moving over the surface of a canvas can give rise to — perhaps even create the meaning for — personal existence.

In contrast, when the general public sees the painting of a woman holding her dead child or a skull, they can relate. They automatically understand that the image speaks of tragedy and loss, the painful truths of mortality. They see that the artist is grappling with the "big questions" we all encounter as we try to figure out what our lives mean.

Vincent van Gogh, the first painter to employ expressionism in the modern sense, remains an abiding public favorite at least in part because all of his painterly distortions were erected on a figurative scaffolding. Viewers may chuckle over Van Gogh's painting of a skeleton smoking a cigarette, but they also understand its deeper meaning. They "get" that the image represents death, the state towards which we are all moving, where we can't smoke (the painting came long before the Surgeon General’s report), can't enjoy any of the pleasures of the body.

Like Van Gogh, Morphesis hangs pure painting on an armature of representational imagery. In doing so, he opens the door to invite viewers of all sorts — whether art world cognoscenti or the non-believing general public — to enter into communion with his deeply felt expression of the quest for the Self.