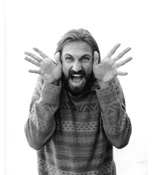 The initial impression of San Diego-based artist Kelsey Brookes is that of the quintessential Southern Californian. He surfs and traded science for art because “art is more fun.” Appealing to the surfer/skater crowd where Brookes maintains a cult-like following, he has primarily exhibited at edgy galleries known for embracing surf/skate subculture and graffiti/street inspired art, among them Lazarides in London, White Walls in San Francisco, and New Image Art in Los Angeles. Shows in Switzerland, Germany, and Japan have supported his wanderlust lifestyle. Pop culture publications featuring Brookes from GQ to Dazed and Confused have further perpetuated his allure. RVCA, the skate/surf brand that prides itself on blurring boundaries between art, film, fashion, music, skate and surf culture provides his base.

Great expectations ride on the Quint show, which Brookes hopes will provide leverage to expand beyond the graffiti art genre. Contending he is more interested in longevity than the overnight success recently bestowed upon many of his peers, Brookes proposes, “Let me eat, but keep me hungry.” The works in the Quint exhibition will confront viewers with an explosion of color and decorative pattern centered around a focal animal or human figure. Inspired by Hindu and Buddhist deities, Brookes merges male and female forms. The result is crude but intriguing. Brookes is self-trained, however his background in micro-biology and nudes appropriated from soft porn internet sites all go into the mix. Jokingly, Brookes blames “this raw, anxious form of art on the US university system which refuses to teach its scientists how to draw.” He adds, “I am not so much interested in accurately drawing from life as I am interested in getting the poses that I desire to compose a new painting.” The internet allows him to combine body parts from different sources, ultimately controlling each piece of the image.

Alongside the Quint exhibition, the California Center for the Arts, Escondido, is currently showcasing “Quint: Three Decades of Contemporary Art,” which features Brookes’ 2009 work Horse Meat. A Pop Surrealist painting, Horse Meat blends splatters of garish pink enamel with a skeletal horse formed using decorative text from a poem by the 6th Dalai Lama. Based on Brookes’ experience eating horse sashimi in Japan, he describes the work as “an homage or maybe as an effort at exorcising the memory.”

Beyond the surface appeal of Brookes’ work and persona, there is intricacy and depth, and also a darker side. The impact results from painstakingly free-hand drawings swirling around his central nudes or exotic animals. As in the work of Ryan McGinness, surreal abstract and figurative images co-mingle to trigger the imagination. However, Brookes grounds his hallucinatory images with text culled from the literature of Shakespeare and Blake. Red Queen (2009) highlights the tension between decorative beauty and darkness that attracts Brookes. The Red Queen references the character in Lewis Carroll’s “Through the Looking Glass,” and is the namesake of an evolutionary hypothesis that inspired Brookes’ fantastical and provocative painting. The piece juxtaposes an androgynous nude with a mask-like face against a mass of color, quilt-like patterns, and overlapping animal images. The subjects are interwoven with text referencing the Red Queen principle that viruses mutate at the same pace as our immune system trying to respond to them. In other words, “We don’t actually get anywhere, we are working hard to stay in the same place.”  Brookes muses, “An understanding of this theory has pretty profound and interesting implications for understanding life.”