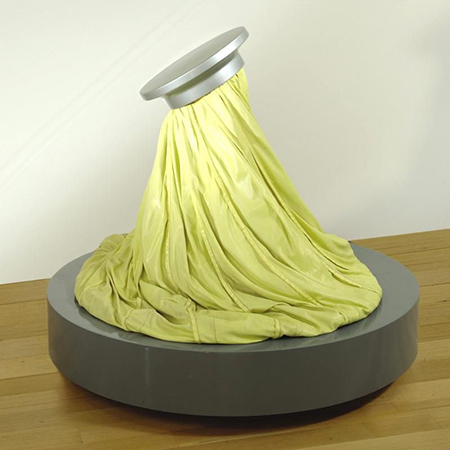 Far from being neglected, dismissed or ridiculed like other 1960s art movements — minimalism, color field, op art — pop art is not only resurgent; it is currently influencing contemporary art and creating waves of lively discourse. A current Seattle Art Museum exhibition, “Pop Departures” (closes January 11, 2015) makes the strongest case yet why (a) pop art still has such wide appeal; and (b) serious artists, curators and critics want to keep seeing and discussing it. SAM curator of contemporary and modern art Catharina Manchanda bifurcates the movement to reflect the long parallel galleries of SAM’s generous temporary exhibition area. This is not a cramped show: tiny Warhol masterpieces such as “Jackie” (1964) are given their own walls as is his majestic diptych “Double Elvis” (1963/1976) with its second completely blank silver panel. The King is in the house.

In short, what “Pop Departures” lacks in identifiable mega-hit loans, it makes up for in rarely seen — or never before publicly exhibited — treasures from local older millionaire collectors and newer, younger billionaires such as ex-Martha Stewart squeeze Charles Simonyi, whose eye-popping cache of six early Lichtensteins opens the show. “On” (1961), a 29-inch-high oil of a yellow light switch, sums it all up: recognizable and reassuring; dead-pan frontal view; and so boring and obvious a subject as to become interesting.

Therefore, on one level, “Pop Departures” is a spotty survey right up to the present; on another, it is a battle of the collectors, the old-line versus the nouveau. Among the first group are Virginia Wright, Jane Lang Davis, Janet Ketcham and Elizabeth Hedreen, who knew many of the original artists. The latter are Simonyi (who invented Microsoft Word), Susan and Jeff (Costco) Brotman and others who bought later and paid dearly. Fortunately, such competitive consumerism has benefited everyone, especially since it is clearly also the subject of much of the art.

Manchanda’s catalogue co-authors go into many aspects of pop art, including its historical origins (Pop art was invented by the British and named by London art critic Lawrence Alloway.) It’s also worth noting other international manifestations, such as in West Germany, where critics, perhaps more percipiently, called it “capitalist realism.” Even Gerhard Richter couldn’t resist the pull of pop. Some critics, like Peter Selz, consider pop art in Germany another example of American postwar cultural imperialism.

In the elegant processional, the second room honors Warhol with a beautiful blend of celebrity and society portraits (local 1960s swinger Jane Davis, for example). To see Marilyn Monroe, Muhammad Ali and Mick Jagger in the same room with Warhol’s eternally terrifying “Vote McGovern” (1972), the most unflattering portrait of Richard Nixon ever, is to relive briefly all the glitter, trash and ecstatic joy of the era.

Across the room, Oldenburg’s kinetic “Ice Bag — Scale B” (1971) quietly puffs up and down, inflating and deflating its yellow plastic top. In a way, really, the best of the batch (and certainly crowned by those 60s critics who hated Warhol), one of Oldenburg’s biggest regrets may have been never having executed “Colossal … Sink Faucet — For Lake Union” (1972). Another collector-billionaire, Paul Allen, who is currently developing that entire south lake area, should fund it now as a crown jewel of public art. Scaled at 10 stories, it would be magnificent.

Things start to peter out before one enters the second half. Mel Ramos and early Richard Prince are now tiresomely sexist, and fail to be redeemed as lasting art.

Manchanda’s other pop heirs — Jeff Koons, Nam June Paik, Robert Heineken and Martin Kippenberger— are iffy; they make the grade but are a lot less fun. Similarly, big installations by Mickalene Thomas, Josephine Meckseper, Margarita Cabrera and Ryan Trecartin make strong cases for pop art’s influence but with little of its startling originality. But how could they? The pre-JFK assassination 1960s were so smug, the time was ripe for Warhol’s kind of bland satire. Everything is ironic now so nothing seems sincere or engaged. Warhol accepted and accommodated consumerism, truly a capitalist realist, not at all disruptive of anything other than received art history. The freshness of pop art has faded, but its energy and gratuitous optimism still remain its main aesthetic qualities.