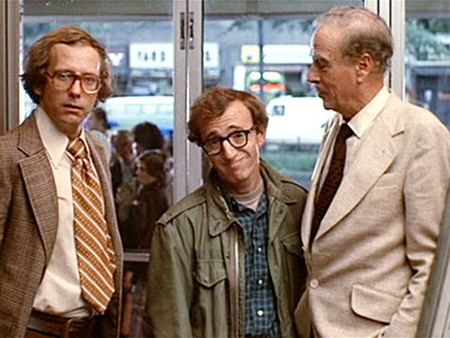 “Boy, if life were only like this.” Woody Allen, still from “Annie Hall,” 1977. Marshall McLuhan appears on the right.

Tonight’s Episode:
Question 9: How do you deal with the proliferating mediums in the art world today?

I recently read, while researching a piece on Nathan Oliveira (whose paintings adorn the newly inaugurated Windhover Meditation Center at Stanford University) that he and other Bay Area Figurative contemporaries — namely Elmer Bischoff, Richard Diebenkorn and David Park — all rejected the linear-evolution theory of art history that was prevalent in the 1950s and 1960s. (It’s in Peter Selz’s catalogue essay for Oliveira’s San Jose Museum retrospective.) This dogma derived from the Abstract Expressionist's critical champion, Clement Greenberg, a 1930s Trotskyite intellectual who transferred his allegiance, as the Depression waned and the Cold War heated up, from politics to art and poetry. However, the Marxist/Hegelian view of progress remained in his thinking, which became so influential that, according to Greenberg biographer Florence Rubenfeld, some dissident artists felt that Greenberg, as the pope of American art, was out to ‘kill’ them. In a sense, that was his aim: aesthetic commissars have to be ruthless, comrade!

Some of this utopian thinking remains in the art world. Each generation rejects the previous one as irrelevant (albeit sometimes finding common ground), declaring its mode the new true way. Such hyperbolic bluster haunts early modernist manifestos, which were by turns amusing and touching to read today: such a fuss! It remains tempting to oversell technological innovations as harbingers of a new consciousness, and doubly so in American culture, with its reflexive next-big-thing neophilia and exceptionalist cultural amnesia (as demonstrated in the recent midterm elections). Yet we still go to art museums, and not just to snap selfies. Were the AbEx apostates correct in believing that art bereft of its new-car smell is not condemned to obsolescence?

Art changes, certainly, as technology changes. Scientific materialism mostly prevails in visual art nowadays; objects of religious devotion, not so much — unless you see the trafficking in market-sanctified trinkets as a kind of capitalist simony. To me, the actual medium in which or of which art is constructed does not matter much, whether it’s egg tempera or egg noodles, VHS tapes or websites or frozen blood or tofu. A person seated quietly at a table in a museum, ministering to supplicants one by one might even work. The medium alone does not make the message. (Were Marshall McLuhan standing in a movie line ahead of me, I would have to tell him he has completely misunderstood art. OK, I exaggerate, a little, appropriating Woody Allen’s finest moment from "Annie Hall.")

Each generation tends to see itself as unique, the egoistic culmination of history. Culture is in fact an antidote to this myopia. The decline in cultural consciousness these days — with cuts in education spending, the triumph of “teaching to the test,” a widespread anti-intellectualism and fear of rationalism — condemns us not only to repeat history, but a pervasive, politically massaged, false version of history.

Jed Perl, among our finest critics, wrote, also for The Brooklyn Rail, in 2012

“I regard all criticism as related, more or less, and I believe that the critic, before all else, is an individual with tastes and passions and prejudices. There is no disinterested criticism, at least not that I want to read. What I do want to read is the critic who is immersed in the particulars of an art form and who can convey the excitement of artistic experience. I also read criticism to see how the arts fit into a broader context, how artists relate to audiences and audiences relate to artists, and how the work of art relates to the workings of society … The critic can wax philosophic or turn to the lessons of history. Or the critic can do nothing of the kind. Criticism is essentially improvisational, intuitive ... criticism matters because art is a big part of what makes life worth living. That is still true today. Nobody can persuade me otherwise."

Should critics ignore new media? Certainly not in the computer age. But neither should they be seduced by faddish techno razzle-dazzle, as seems to be the case when technical perfection is held to be the summum bonum. Critics (and audiences) should strive to be as culturally literate as they can manage, while avoiding the other extreme, snobbish pettifoggery. Call it the Long View Middle Way. Nothing can persuade me otherwise.