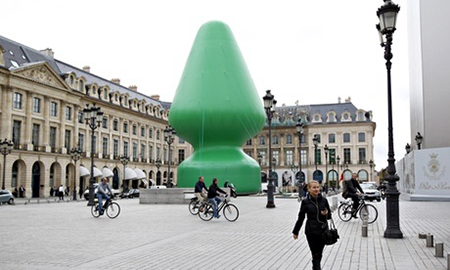 There are dispiriting similarities in the ways in which sexuality and visual art are thought of in contemporary culture. Each realm has been rigorously commodified, their monetary currencies inflated even as their symbolic currencies are devalued by irony, shock value, and the metastasis of technology. One of the dominant motifs currently proliferating in films, television, and the Internet is a particular brand of sexual lingo describing once-obscure phenomena or fetishes: “felching,” “pegging,” “snowballing,” “rusty trombone,” “queef,” “Dirty Sanchez,” and the like. No longer the exclusive fodder of radio shock jocks, these terms have been assimilated into mainstream cultural literacy.  Notably, the common denominator of these phrases is not their presumed kinkiness or crudity, but rather their syntactical and conceptual strategem of de-romanticizing serious ideas and turning them cutesy. In the case of sex — and surely the nature of eros and the propagation of the species stand among the most serious concerns of the arts and sciences — this cheapening of ideological value effectively divests the subject of the gravitas it long commanded among the likes of Aquinas, Shakespeare, Darwin, Freud, and Lacan. And so, in place of the High Romantic conceit of sexuality as “Mother Nature’s dark embrace,” as Camille Paglia called it in "Sexual Personae," we now see sex defanged, infantilized, and impotized via catchy, baby-talk neologisms.

Something similar is happening in contemporary art. With the postmodern downgrading of the idea of serious intent into a series of codified in-jokes, bathos — the intrusion of mundanity into what was once held up as profound — has become the dominant motif of our visual arts as well. Whether one traces its etymology to Duchamp’s mustacioed desecration of the Mona Lisa, Warhol’s Brillo pads and soup cans, or Andres Serrano’s submersion of a crucifix in urine, it is unquestionably the bedrock upon which artists such as Paul McCarthy and Jeff Koons have built their careers. On less rarefied planes, the legions of artists who make what Jerry Saltz calls “termite art” — and which the cable TV series “Portlandia" summarized with the dictum “Put a bird on it!” — also trade in the fetishization of the banal. This artistic persona is about as far as one could possibly depart from the notion of the heroic or tragic-romantic artist in the vein of Caravaggio, Picasso, or Pollock; or from the conception of art-making as a means to spur social change, à la Mondrian, or spiritual transcendence, à la Rothko.

What we have instead produced, several generations after Susan Sontag identified the burgeoning of camp, is a double-coding so insidious, it makes camp look dead-earnest by comparison. The appeal of post-irony is its nostalgia for all things cheesy (think of Will Ferrell’s "Anchorman: The Legend of Ron Burgundy"), which can simultaneously be snickered at and enjoyed. It is not always unwitty, as you know if you’ve admired Damien Loeb’s horror-film redux paintings or the art-historical sight gags that Jonathan Paul, aka “Desire Obtain Cherish,” trooped out in his exhibition, "We Are Known By The Company We Keep" this past spring at Unix Gallery in Chelsea. Even in artists we typically think of as neo-Romantic, such as photographers Justine Kurland or Ryan McGinley, it is impossible to parse the extent to which the work pays homage to, or parodies, the nostalgia embedded in its style.

What is clearer is that the ways in which we make art — and make love — are being transmogrified by the same cultural forces. In both arenas, the siren song of technology and the voyeuristic eye of social media are supplanting the individualist impulse with consumerist exhibitionism, turning us all into wannabe porn stars and art stars in a multi-billion-dollar game show. It’s easy to simulate sturm und drang in this brave new world, as we pump up our genitals with pills and inflate our auction houses with hype, but it’s much more difficult to summon any genuine, organic excitement. If we want to recapture the old mojo, we have to remember that it resides not between our legs or the folds of our wallets, but between our ears. We have to rediscover our capacity to idealize. And we must recultivate a discourse in which seriousness, sincerity, and reverence have room at the same table as winks, nudges, and queefs.