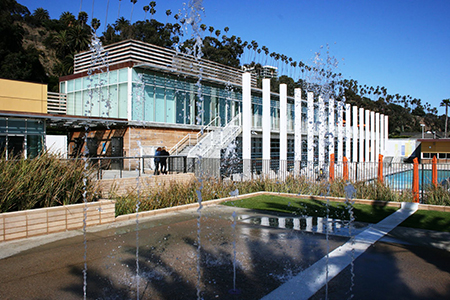 A recent trope of TV news is the digital zoom shot that circles a Google Earth graphic so as to land smack in the middle of a story. It conveys the feeling of the intimacy of shared planetary space that gives way to the enormity of the physical spaces in which human-scaled events take place. The failure of the average news clip is that it promises too much; summary descriptions and sound bites provide breathless narratives. I want to move in for a closer look, land us in Santa Monica, and give you a sense of the little creepy-crawlies scurrying along the ground busily, if gradually, shaping and re-shaping various occupational structures in a continuous striving towards evolving adaptability.

I've been following a story here for some months that tantalizingly bridges the macrocosm of the refined attention of the international art elite with the microcosm of the most ordinary grass roots politics you can imagine. The matter of whither Bergamot Station, a gallery compound familiar to art fans around the world, occupies a distinctive space somewhere between the Museum of Modern Art and Project Row Houses. Just about thirty privately owned galleries and one kunsthalle-style museum play the central roles in a hothouse environment of a city-owned five acre parcel of land, what many of the principals like to characterize as a fragile ecosystem specially constructed as an oasis for art. The principle is without controversy. But what exactly "preserving" that environment means is.

The principals have divided into two factions that sing from the same hymnbook, namely that action must be taken now because The Train Is Coming. Such an obvious metaphor should be ficticious, however it is anything but. What was for decades a depot for the old train transit system (from 1875 to 1953) is soon to offer a stop along the Expo Light Rail Line now expanding towards the beach. On the one hand, the Santa Monica Museum organized a constituency that, much as they love the idea of Bergamot as a "cultural center" and the museum in particular, don't much like the status quo. A parade of these folks, by their own testimony, find the place too dark too much of the time; they don't quite feel safe there; buildings are dilapidated and run down; Santa Monica is falling dangerously behind an east-bound audience migration; the place is currently too much of a "monoculture" (too darn many, uh, galleries); the current attractions just aren't a great sell to teens or families with kids. These were the themes offered repeatedly at a September 9th public hearing before the local City Council.

On the other hand the self-described "dysfunctional family" of galleries that have occupied at least 80% of the space since the place was first outfitted especially for them about twenty years ago (along with a natural constituency of "slow-growth" allies from local communities) would probably be happy to dispose of the train stop altogether and continue life as it once was. Of course, they know that option left the station, so their focus has been on their certainty that if redevelopment is to come, the wrong sort of redevelopment will lead to a full scale evacuation – if not a preemptive eviction – from the Bergamot womb that may or may not enrich other parts of greater Los Angeles. Their collective fear is palpably existential.

The crux of the hearing revolved around a matter that should normally attract little public interest and no meaningful commentary: the selection of a development team to adapt the art compound to the new, more crowded world that a train stop necessarily brings with it. Reviewing preliminary proposals from three competing "teams," the local Cultural Affairs and Economic Development departments touted the one that the galleries concluded was most likely to kill them off by virtue of the mixture of usages their plans would introduce: a hotel that they are eager to build as quickly as possible and, most odiously, an underground parking garage that would require digging an enormous hole right where all the parking is currently situated. The museum would get greatly expanded new digs; a pair of major local universities along with music and performing arts ensembles would be outfitted with state of the art facilities; a second level of storefronts inviting interesting restaurants and boutique retailers would add up to a quadrupling of interior space. And families would be able to stroll along beautiful new greenery, all safely lit at night when those galleries are closed and the action really gets going.

Stunningly, the City Council didn't take their departments', nor the museum's advice. At the end of an hours-long parade of public testimony, and in part because the developer-in-waiting inflicted real damage to its own cause in the course of it's two minute allotment, all but one member of that vehicle of civic will voted to extend exclusive negotiating rights to the other guys favored by those other art venues: the developer who plans to proceed with caution; who favors any plan that will enable the galleries to stay even if prospective retailers decide the place might not be so attractive; who will build that hotel last if at all; who thinks digging a hole for underground parking is a terrible idea; and who is less interested in the place becoming a multi-faceted cultural showpiece and more interested in improving conditions for what it has been right along: a mecca for those who love to visit those art galleries, which have been Bergamot's singular attraction from the start. The current holder of the master lease and gallery co-owner Wayne Blank put it succinctly: "The City Council did the right thing."

So Jeff Worthe and Fred Fisher, let us introduce you to Bergamot's loveably dysfunctional family; folks, meet Mr. Fisher and Mr. Worthe. Something tells me that you are going to become friends.