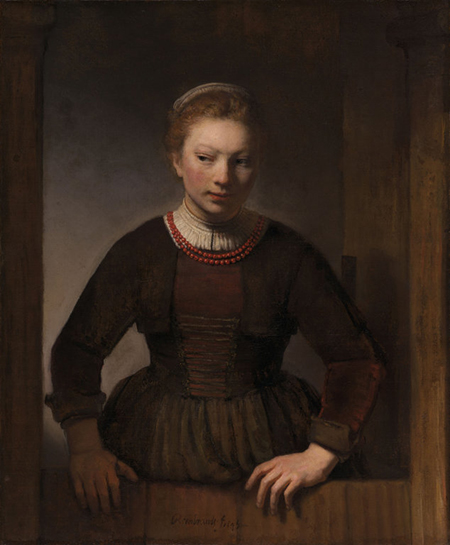 It’s particularly wonderful when an art museum acknowledges that something in its permanent collection, particularly if it’s a popular art work, is probably not what it’s advertised as being. That takes courage, and the Art Institute of Chicago (AIC) should be applauded for the long journey it has traveled in its relationship to what once was among the most famous and admired paintings on display there. It’s a painting called "Young Woman at an Open Half-Door." The picture is signed by Rembrandt and dated 1645, and has been on view at the AIC since 1894. For the following century it was a popular and widely reproduced painting, and was highlighted as a major work in its collection in a museum guide as late as 1987. But by then doubts had begun to surface as to whether it truly was painted by Rembrandt, and in the opinion of a growing number of scholars, including the prestigious Rembrandt Research Project, the painting wasn’t by him at all. It was, to them, a shop piece, done by some member — clearly a talented one — of the large number of pupils and assistants Rembrandt worked with over his career.

This isn’t the place to go into the nuances of the arguments about the AIC painting, pro and con (though it’s fascinating to do so), but even a cursory look at a painting by Rembrandt with a similar subject, also from 1645 in the Dulwich Picture Gallery in London (http://www.bbc.co.uk/arts/yourpaintings/paintings/girl-at-a-window-200382), indicates that the Chicago painting could be seen as less accomplished a picture, in terms of psychological intensity, complexity of composition, and in the command of some anatomical details and spatial issues. It’s stiffer as a conception, lax in some areas, and just seems short of the great sense of engagement that marks Rembrandt’s work.

The first response by AIC curators to this challenge in the 1980s was largely to ignore it. They had, as did tens of millions of visitors to the AIC in the previous 90 years, just taken for granted that the painting was by Rembrandt.  That’s what generations of earlier scholars had said, that’s how it was presented in innumerable exhibitions and books on Rembrandt, that’s what the label said, and that’s what the popularity of the picture seemed to prove. And, they may have reasoned, since this all resides in the realm of opinion, scholarship, and connoisseurship, there’s no way to ‘prove’ who painted the picture anyway, so why needlessly confuse your audience? The label at the side of the painting continued to identify it as by Rembrandt, and only those who followed the arcane processes of art historical debate had any knowledge of this affair at all. Why not just leave it that way? Virtually none of the visitors to the museum had heard of the debate to begin with, and could probably care less, and would receive more enjoyment in front of a painting identified as by Rembrandt than one that said it was by “Workshop of Rembrandt” or some such ambiguous identification. Why not just circle the wagons and say that in the opinion of the AIC the painting is by Rembrandt, and declare case closed?

And here’s where my respect and admiration for curators and museum professionals has grown. The reason why the AIC didn’t do that, and why today the painting is identified as by “Rembrandt Harmenzoon van Rijn (Workshop of)” is that the museum is run by scholars and arts professionals who have a responsibility to tell the truth as they see it, not as they wish it, and to attribute works of art as accurately as they can. It’s considered bad form to inflate the stature of a museum’s collection by presenting, say, what is clearly a workshop variant from El Greco’s assistants as by El Greco himself, unless they believe it to be so. There’s always that one visitor in 1,000 that does know about this, and if word circulated in museum circles that the AIC inflated its attributions, its peer reputation would be damaged. But, as successive wall labels over the last twenty years indicated, little by little doubt had begun to creep into the minds of the men and women who run the AIC about this ‘Rembrandt,’ and eventually led them now to downgrade its attribution. Meaning what? Well, it’s subtle — as the years have gone by I’ve noticed that the "Young Woman" has been replaced in guides to the AIC by a second Rembrandt (a portrait of a man) that it owns, and it’s been moved from a central position on its wall to where it is now, at the end of a wall. The painting is no longer lent to outside exhibitions as by Rembrandt.

Of course, almost none of this comes into play in modern or contemporary art, it’s most commonly a situation with European art between 1300 and 1800, when many artists had large workshops where they trained the next generation, and part of that training was having apprentices create variants of their master's works. This is not about fakes or copies, it’s about a student mimicking his or her teachers manner so well that at times it becomes difficult to distinguish between the two. This is made all the more complex by the occasions when the master artist did a bit of work on the image as well. Such artworks are undoubtedly hanging with incorrect or inflated attributions at most major art museums, and as they discover such instances museums are right to make appropriate corrections, as the AIC did here.

Our attitude towards the painting has changed; I’ve seen visitors to the AIC move on from it quickly when they read on the label that it’s not a ‘real’ Rembrandt. It will almost certainly never enter the market again; if it did its value has been reduced some 80 or 90%.  It’s unlikely we’ll ever know for certain who painted it — Samuel van Hoogstraaten? Jan Victors? Willem Drost? (he’s my guess) — the identification “Rembrandt Harmenzoon van Rijn (Workshop of)” means that the AIC has concluded it is not by Rembrandt. Of course, the painting itself is oblivious to all this, the young woman looks toward our left, lost in thought, as she has for 370 years. She certainly knows something that we don’t.