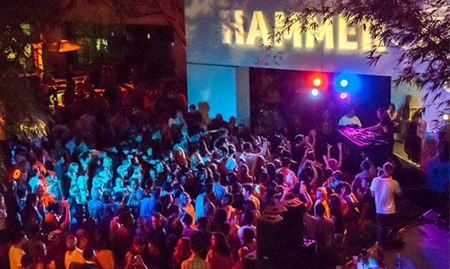 2013 Gala at the Hammer Museum

Certain things will happen at an art opening, and other things will not. Invariably the artist will be thronged with well-wishers offering congratulations. If the artwork is colorful, people will say, “I love the color!” If a particular hue dominates, they will say, for example, “I just love that gorgeous red!” Next to no one will ask about the ideas behind the work. Many people, especially fellow artists, will ask about the process, especially if they want to appropriate aspects of that process into their own work. If the show was favorably reviewed, the review will be mentioned; if it was panned, either it won’t be brought up, or the critic’s credentials, taste, personal character, and personal grooming will be impugned.

Many people who have made only a cursory perusal of the exhibition will ask the artist, “What do you have coming up next?” Scenesters and purported collectors who have never actually been observed buying a piece will mill about, sipping or gulping merlot. They will proceed to the cheese plate before accidentally running into the artist, whom they will tell (with their mouths full) about how their mother used to do watercolors when she was young. Beyond these absolutes, there isn’t much else taking place at openings.

But there are plenty of taboo topics that are never voiced, even though many are obvious. Here are a few:

Most artists are not able to support themselves through art sales. Their art careers are subsidized by day jobs, independent wealth, or a spouse or parent. The same is true of many gallery owners.

Artists lucky enough to have galleries and regular shows are ahead of the game if they sell even six or seven pieces a year.

At their openings, if given an either/or choice, most artists would rather someone engage them meaningfully about the ideas behind their work than make a sale. They would also prefer a rhapsodic review to a sale.

Most shows will not be critically reviewed. There are too many shows, too few critics, and too little ink. Despite oft-repeated claims to the contrary, cyberspace has not redressed this imbalance. What few serious critics are left, receive at least 150 press releases each month. Most are poorly written, lack basic facts, and include no images of the artwork. Critics are apt to delete or trash these releases after reading the first two sentences. Habitually, critics are more apt to write about artists they’re already familiar with than artists they’ve never heard of. If an artist is fortunate enough to be reviewed, the review is often riddled with careless factual mistakes and false assumptions.

The majority of artists are not part of an “artistic community.” What laypeople romantically assume is a thriving café society of supportive, gregarious friends, is actually a splintered armada of ships passing in the night. Artists tend to be bitterly competitive loners who envy their more successful peers, whom they feel they must battle for crumbs of the same meager slice of pie. The same is true of gallerists and critics.

Artists fantasize about an opening incessantly, then, when it arrives, are overcome with dread. The night generally begins with anxiety, progresses to frustration, and ends in anticlimax or despair.

Fearing they are actually poseurs (or, even worse, hobbyists), artists doubt their life-paths on a near-daily basis, wondering whether it’s too late to embark upon a completely different career.

Nevertheless, despite the formidable and sometimes soul-crushing odds against material and critical “success,” artists are some of the most doggedly tenacious, spirited, responsive, broad-minded, emotionally honest souls you’ll ever encounter. They’re eternally striving for the next step, the next leap. Those who stick with it do so at considerable psychological cost. More than anything, they want to create objects or experiences that encapsulate their highest vision of what life can be — and maybe, just maybe, help you see the world in a slightly different light.

So the next time you’re at an opening, find something to compliment besides the gorgeous red, and please don’t talk with your mouth full.