“Abstraction and the Once-Silenced Shout”
Editors' Roundtable
by Richard Speer 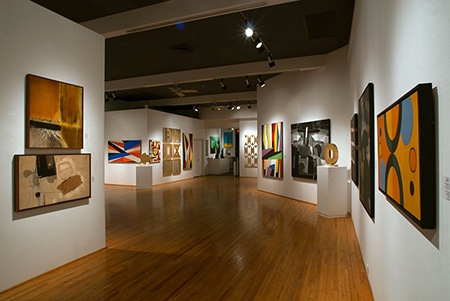 Recently I took in an exhibition in Miami that documented an era when abstract art was thought so radical and dangerous that it incited censorship. "The Silent Shout: Voices in Cuban Abstraction 1950-2013", currently at ArtSpace/Virginia Miller Galleries, features paintings and sculpture by three generations of Cuban artists. The eldest of these, now in their 80s, were driven into underground art movements during the regime of Fidel Castro.

As the exhibition’s co-curator, Janet Batet, explained in a lecture about the show, there was a 34-year void from 1963 to 1997 when no exhibitions showcasing abstract work were officially sanctioned anywhere on the island nation. Abstraction, Batet holds, was deemed threatening by government arbiters, who instead were bent on promulgating figuration, narrative, “and the predominance of a sweetened, folkloric view of being Cuban.” Artists working in the veins of geometric abstraction and Abstract Expressionism, it was determined, “were turning their backs on Cuban reality: They were evasive, and furthermore, their art was elitist and favored imperialism.” These artists’ sentiments, essentially, were internationalist rather than nationalist. Disastrously, by silencing aesthetic innovation, Castro the revolutionary-cum-dictator promoted a conception of Cuba that was anything but revolutionary, indeed which was in fact reactionary. Indeed, the Havana of the late 1950s and early 60s was far from a sleepy, colonialist outpost of tiled roofs, colonnades, and fountain-dotted courtyards; it was a bustling modern city in which traditional influences mixed with Art Deco and modernist architecture. Thus, the leaders of a radical political movement wound up cutting off their potentially equally-radical artistic compatriots at their knees.

This shouldn’t surprise. Censors always wind up on the wrong side of history. The Nazis persecuted erstwhile Weimarian avant-gardes who’d dared create what Hitler’s minions termed entartete Kunst (“degenerate art”), yet that very work has become part of the modernist canon. Under Stalin, everything other than socialist realism was quashed — and what turned out to have the longer legs? As recently as the late 1980s in the United States, government, religious, and special-interest factions variously censored artists such as Robert Mapplethorpe, Sally Mann, and Jock Sturges. Chinese authorities continue to tamp down artistic expression, most infamously in the recent case of Ai Weiwei. And last June, the Russian Ministry of Culture shut down Vasily Slonov’s darkly satirical exhibit “Welcome Sochi! 2014,” at the Perm Museum of Contemporary Art, and fired the show’s curator. But in today's paradigm of instantaneous global communication, the flow of information cannot be controlled.

Meanwhile, even as explicitly political work continues to draw fire, we in the West seem to have finally gotten over our longstanding preoccupation with prosecuting “obscenity” and have become inured to what was once thought transgressive. This is thanks largely to artists such as Paul McCarthy, who not only found the line where intrigue ends and shock value begins, but have taken that line and, to invoke John Donne, have trampled it “like gold to airy thinness beat.” The idea of the art object as dangerous simply because it is non-representational seems quaint and unthinkable today. No contemporary artist with a straight face would dare suggest anything so preposterous as Piet Mondrian did in his Natural Reality and Abstract Reality: that his ideal of a “purely equilibrated relationship” between horizontal and vertical, if absorbed by the culture-at-large, would result in no less than “a new stage of the human life-force: the new man, a combination of worker, bourgeois, and aristocrat.” Those were fighting words when Mondrian’s treatise was published in 1919, just two years after the Bolshevik Revolution and one year after the armistice that ended the Great War.

After the bloom of De Stijl faded — and later, after Abstract Expressionism gave way to “lyrical abstraction” and, in the eyes of many art historians, swan-dived into the pabulum-pit of decorative blandness — nonobjective painting found itself defanged. Today, a saunter through even the most insipid beach-town “decorator gallery” yields no shortage of hard-edged or gestural compositions, dutifully traversing the color wheel. The once-revolutionary has turned ho-hum. When an abstract painting makes headlines today, it’s because of how much cash it fetched at auction. A case study is Gerhard Richter’s "Abstraktes Bild (809-4)," which in 2012 sold at Sotheby’s for $34.2 million, a record sum for a painting by a living artist. And so we have traveled from an era when abstract works threatened the ruling classes to one in which they have become the trophies of the super-rich. The only way to restore the sexily sinister edge abstraction once embodied would be a tactic no one would wish for: to suppress it once again.