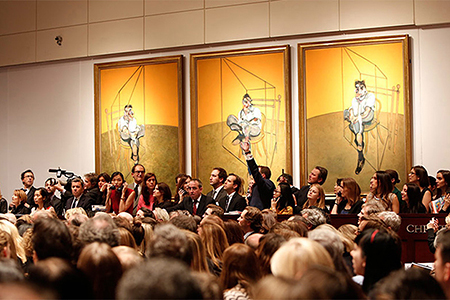 With the recent anonymous purchase of the Francis Bacon triptych for $142 million, another record was broken for the most expensive artwork ever sold. Concomitantly, a friend of mine living on Vashon Island was subjected to a 12-step intervention by her married daughter. The addiction? Collecting. Since when is this a sickness meriting adult children objecting to parents’ hobbies? Both the Bacon collector and my friend, whose family founded Seattle’s oldest tourist attraction, Ye Olde Curiosity Shop, in 1899, must have the collector gene, my newest explanation for those who just can’t help it.

Let’s have a brief look at what some critics and thinkers have to say about art collecting and collecting in general (because art is just one of a zillion things to collect): Karl Marx, Sigmund Freud, Walter Benjamin, Jean Baudrillard and Werner Muensterberger, among others, all weighed in on the topic. Whether drawing on economics, sociology, psychology or other social sciences, each has insights worth sharing in order to help answer the perennial question, to paraphrase my friend’s daughter, “Why can’t Mother stop?”

From the scientific to the supernatural, writers have analyzed collectors and collecting in numerous ways. As recently as 1949, journalist Russell Lynes noted that “the person who once begins to run an art fever is likely to find himself with a galloping disease.” This attitude is shared by many who refer to collecting as a “blessed obsession,” “a mirror of self,” leading to an eventual “loss of all sense of the present.”

Continuing the psychological approach most common to 20th-century analysis of collecting, John Forrester reminds us that with Freud’s collection of antiquities (the subject of a book by Donald Kuspit), “the collector may be using his collection to express relatively simply his attachment to his ideal objects: collectors talk to their collections just as owners talk to their dogs. Freud would commune in silence with a newly acquired piece over lunch.” Muensterberger expanded on this in 1994 by adding that collecting “is inextricably bound up with an inner need for ever new supplies for the enhancement of the self.”

Whether to enhance the self or, as some scholars hold, to fill an inner void forever incapable of completion, French theorist Baudrillard stressed the power of what is not yet collected, i.e., that “an object only acquires its exceptional value by dint of its absence ... what we have begun to suspect is that the collection is never really initiated in order to be completed.” Taken to an extreme, author and collector Robert Opie confessed that “There are no limits [to collecting] but that doesn’t mean I want , everything — that is the difference between being sane and being mad.”

On the broader social and contextual stage that may motivate some collectors, critic Roger Cardinal holds that “every acquisition ... makes an unrepeatable conjecture of subject, formal object, place and moment.” Thus, the collected object freezes time, lives in its past, and takes on a ghostly presence in the future. This quality has led others to imbue extra properties to collections, with Muensterberger seeing them as “magically potent objects,” and William Davies King invoking collecting as “a form of sorcery (or prayer).” Frankfurt School philosopher Walter Benjamin brilliantly captured this numinous dimension, writing of “the deepest enchantment of the collector to include individual pieces in his circle of power,” as if the collector were a shaman or magician. Elsewhere in “Illuminations” (1968), Benjamin attributes such powers to “little genii, which have seen to it that for a collector ... ownership is the most intimate relationship that one can have to objects.”

Artists like Edward Kienholz, Louise Nevelson and Joseph Cornell transformed their collections of nostalgic tchotchkes into their art. Piper O’Neill, a Seattle artist whose carnival chalkware figures are cast in bronze, said of artists who pursue this that “It’s part of their identity ... Collections are an impetus to memory, like a visual trigger combining nostalgia and the object’s inherited history.” Speaking before her January 2014 show at Winston Wächter Gallery in Seattle, O’Neill concluded that “any random object can be reassigned meaning. Some mundane object that someone else thinks is junk, I can love. It is a way of categorizing emotion or sentiment.”

My friend on Vashon was able to evade the 12-step program for collectors and, as a lesson to her daughter, recently drove a minivan-load to northern California filled with family treasures, including 1912 sets of wedding china, abalone table scrapers, art nouveau earrings, Victorian crystal salt cellars, antique cloisonné objects, lots of custom-designed silver-and-turquoise jewelry and dozens of Northwest Native American baskets. When confronted with the residue of her grandmother’s estate, the daughter could not resist; the collector gene had been transmitted after all. Ultimately, even the most subjective collection changes hands.