Without Fear or Favor
Editors' Roundtable
by James Yood 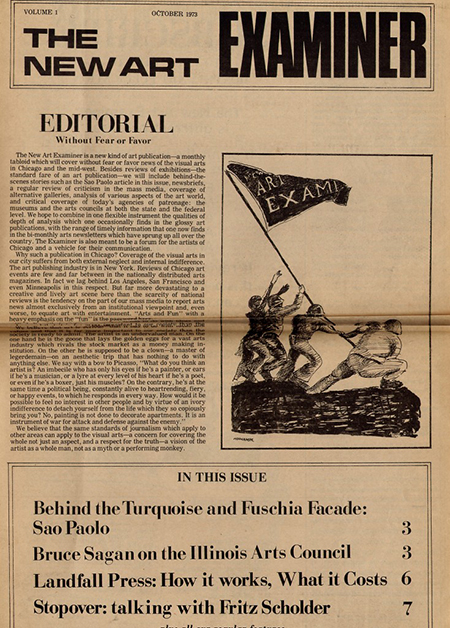 This month marks 40 years since the publication of the first issue of the "New Art Examiner," a Chicago-based monthly arts publication — originally a tabloid, then a magazine — that eventually went under in 2002.  Many of you probably never heard of it, some of you may have caught an issue or two over the years, and — I hope! — more than a few of you read it more regularly and came to regard it favorably, seeing it, as its masthead said each month, as the “Independent Voice of the Visual Arts.” I wrote for it for a good part of its history, and for a period in the 1980s was its editor, succeeding Alice Thorson and followed by Jean Fulton. But enough of my stroll down memory lane. Those of you seeking more of a feel for it can peruse "The Essential New Art Examiner," a compendium published in 2011. If you’re at the College Art Association convention in Chicago this coming February you can sit in on Buzz Spector’s panel discussion on the NAE and its impact.

My most active years there took me back to the 1980s, when the concept of the “cultural worker” was bandied about. It intimated that art extended well beyond the activities of the creators of it, that besides artists the art world was comprised of critics and art magazine staffers, dealers and their employees, art movers, curators and other museum hands, photographers of art, arts administrators, auction house workers, and even collectors too in their way. All comprised a culture industry that was a multi-billion dollar enterprise that required the participation of thousands of arts professionals, all of whom somehow played a part. The phrase “cultural worker” had a vaguely egalitarian air about it, implying a community that, while never a communal cooperative, at least had honorable tasks to perform, at the center of which was the artist in his or her studio.  At the "Examiner" we all felt we were doing something significant, that analyzing art and its reception was necessary and salutary, that we were engaged in a process that was worth the effort.

It still is. Of course, you’re the last people I need to sell on this notion. You’ve found your way to VAS and read this far, so you’re interested enough to think these things matter, to sense the value in understanding how culture can be consumed and articulated. It’s chastening to recall how radically the formats have shifted, though.

At the Examiner in the 1980s the magazine was still designed by cutting up typeset columns of text and pasting them on large leaves of cardboard stock that were then driven to the printer in Michigan. Our regional writers would snail mail — though we didn’t call it that — disks to the Chicago office. And only sometimes could our clunky oversized computer — for quite a while we only had only one computer - could open. The column you’re now reading, on the other hand, may never see paper. It’s written on a computer, sent to the editors by e-mail, and accessed by you through the internet. Platform changes do have meaning, but the underlying endeavor remains much the same. VAS is comprised of reviews, columns, news and information, and it can be much more timely — you can actually still see the exhibitions it covers, something almost never true then or now of art mags. Further, if you read something you do or don’t like you can blog about it, post it on Facebook, etc. The day of the reader as a passive receptacle is gone forever.

Another similarity between VAS and the Examiner — both are/were dedicated to examining visual culture outside of NYC, which is as important a challenge to American cultural criticism today as it was forty years ago. Players change, formats change, but the core agenda seems to continue, to try to articulate a fuller understand of American art by acknowledging the full extent of its cultural offerings, and holding them up for rigorous judgment.