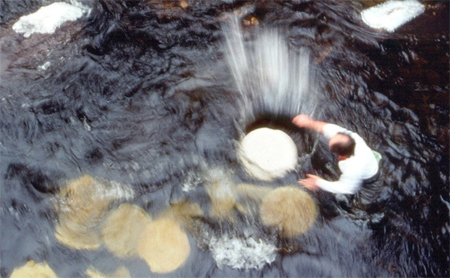 After Dale Chihuly (with whom he co-founded Pilchuck Glass School in 1971), Jacob Lawrence and Mark Tobey, 71-year-old Buster Simpson is probably our best-known Seattle artist, certainly for people under 30. Prophet of social ecology meets art, he has created more personae than his forerunners Marcel Duchamp and Joseph Beuys. Simpson has not only fallen through the cracks of the mainstream art world; he has fashioned the cracks themselves. He has combined Duchamp’s taste for readymades, puns and alter egos with Beuys’ role of prophet and social activist.

Scott Lawrimore, Curator of the Frye Art Museum retrospective “Buster Simpson//Surveyor,” claims in the lavish catalogue that the artist has been “overlooked, undervalued, uncontextualized and uncanonized.” Still, Simpson’s bibliography is extensive. His national profile is demonstrated by dozens of permanent and temporary commissions, many of which are represented by photo-documents, plans and catalogues in the exhibit.

The result is an exhilarating but ultimately frustrating attempt at boxing in an artist whose 40 years of projects look best outdoors. However, Lawrimore has done the best he could considering the unwieldy nature of Simpson’s oeuvre. Besides blueprints and plans that fill a hallway, photo-documents of completed and uncompleted projects in glass-top display cases, and certain modified older pieces ("Crow Bars," "Counterparts," "Tree Guards," "Gold-Leaf Fencepost"), Lawrimore has made it possible for the University of Michigan graduate to create seven new works that appear inside and outside the building.

Among these, "Secured Embrace," a huge tree trunk with roots resting on a cement cradle afloat on the Museum's courtyard entry reflection pool, is a breathtaking welcome. Recycling nature, sculptural insertions, and special site-specific settings — three Simpsonian themes — are all summed up. Inside, "Double Header Finial" punctures a gallery wall, folds down the wall part onto one side, and fills the gap with numerous anodized brass-colored flagpole finial tips above a thick sheet of plate glass. Like Gordon Matta-Clark and other arte povera and postminimal artists close to Simpson’s generation, the Seattle artist is inspired by particular places, undemonstrative materials, and a sense of usefulness or social purpose.

To see the older pieces and newer works brought together was to bring back memories for those of us who were eyewitnesses to the original events in the Belltown artist’s quarter near the Pike Place Market in the 1980s. For instance, "Belltown Pan" (1981), shaped like a bell, was used each Groundhog’s Day at the Digger-type restaurant Belltown Café. Simpson’s recipe for “root pie,” a delicious all-root-vegetable pie was served free to patrons all day each year (I have continued the tradition in my kitchen at home ever since — though without the homeless guests).

Seeing the 14-minute video loop of Simpson dressed as "Woodman" (1974), his downtown wood-scrap picker persona, was to re-experience similar sightings of real denizens in the alleys of Seattle during the period. Ironically, much of Simpson’s belated power as an artist derives from his triggering residual memories of his performances and art events. These also include "Crow’s Nest" (1979), a human-size bird nest with the artist as literal tree-hugger inside what proved to be the penultimate cherry tree in the Pike Place Market before its massive re-development. Simpson undertook unsuccessfully to save the tree and draw attention to the Market. A ladder made from the wood is at the Frye, but it fails to fully recreate the courageous, Barbara Frietchie-like event (“Shoot, if you must, this old gray head, but spare your country’s flag”).

New Year’s Eve 1983 meant joining another crowd in the Market to celebrate and witness the unveiling of several installations in a condemned dive bar, 90 Pine Street. While the champagne flowed for the collectorati, homeless alcoholics meandered among the crowd quaffing Mexican beer. Viewers could remotely slam hundreds of empty beer bottles off the bar using wooden two-by-fours connected through the roof to woodman cutouts. Within two years the building was gone. Thus, Simpson is one of the few contemporary sculptors who is also a poet of the absent: memory itself becomes a recyclable material. His work is this profound.

Among the new works, "Captiva Ladder Chair" symbolizes the artist’s insistence upon multi-purpose references. A ladder and a chair, as well as a gauge to meter the rising water levels on the Florida island, it alludes to the king of Captiva, Robert Rauschenberg, whose foundation invited Simpson for a residency. The ladder is a common image in many of the late artist’s prints.

Are the contextual and rhetorical dimensions of Simpson’s sculptures in danger of overloading and evaporating over time, leaving their material and formal strengths? Yes, in my opinion. Thus, it will be sufficient to have the residual sculptural objects, beautiful and witty as they are, stand on their own. Stripped naked, like Simpson in his 1983 World Trade Center video "Projecting Limestone Purge," the objects have exceptional presence — materials, form, color, profile, silhouette — that will eventually transcend the loquacious attempts to control meaning. Craft and concept co-exist in a balance the future will bestow regardless of intentionalist verbiage.