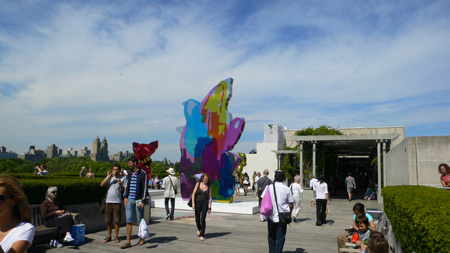 Last week, on the final day of Jeff Koons’ show at Gagosian Beverly Hills, I stood under the artist’s 18 1/2-foot-tall sculpture, "Coloring Book" and thought of Dave Hickey. The renowned art critic told The Observer’s Sarah Douglas last October that he is retiring from full-time criticism, in part because of contemporary art’s decline into a cash-driven, idea-poor spectacle tailored to the financial portfolios of the rich. He complained to Douglas that “… there’s no middle class anymore; there’s a courtier class ... We’re intellectual headwaiters to very rich people.” Art dealers and consultants, he observed, along with the proliferation of fairs, biennials, auctions, and themed group shows, have usurped personal taste and replaced it with the bottom line.

As I stood in the long shadow of Koon’s "Coloring Book," it occurred to me that over-the-top works such as this and Damien Hirst’s diamond-encrusted skull titled "For the Love of God" are part of what Hickey was decrying. But the critic, always a sharp and deliciously smug commentator, is seeing only a slice of the art-world pie. Below the aerie of Gagosian, Mary Boone, Pace, Bruno Bischoffsberger, and a rarefied handful of other galleries are two substrata that Hickey doesn’t deal with. Layers of the art world that critics such as myself, who toil in the provinces (meaning the less elite locales from Los Angeles on down), are privy to day in and out.

The first of these two other kingdoms, on the lower end of the blue-chip-to-déclassé continuum is the design gallery, where ostensible philistines such as interior decorators and condo-dwelling yuppies cater to the “Will it match my sofa?” mentality. This is not just a trope; I have personally known artists who accompany their gallerists to client consultations at which the clients responded to works that harmonized chromatically with furniture, flooring, and wall treatments. Thousands of artists make decent to superb livings this way, and the people who buy their work should not necessarily be denigrated simply because their responses are based on design decisions and not the artist’s aesthetic intent or pedigree.

Then there is the vast continent between the design galleries and the Gagosians. This is where the majority of people who call themselves artists exist. It is not an especially lucrative realm, by most externally observable standards. Being self-aware, human beings are damned to know where they rank within a pecking order. All artists who are not Jeff Koons or Damien Hirst know they are not Jeff Koons or Damien Hirst. They are painfully aware they are not getting the high-profile shows, impressive sales, and volume of critical reviews with which those artists are blessed.

Among living artists, there are perhaps a hundred whose work commands a strong secondary market.  The others — millions of them around the world — troll for scraps of financial and psychological sustenance. They seek for their efforts at least a modest level of material success, insightful feedback on their work, and some reassurance that their art is deserving of having been created. Most of them feel lucky to sell two or three pieces in a given show and to receive a smidgen of validation from their gallerists, fellow artists, family, or friends. Most of them will not get reviews, because the ink devoted to art criticism is drying up, and there are just too many artists competing for too little attention.

I have always maintained that the world would be a better place if there were a total of only 1,000 individuals making artwork for the entire global population. Chances are, when a new piece arrived in a town square, museum, or private home, bells would toll, announcements would be sent out, and throngs would line up to “Ooh” and “Ah!” Until such time, almost anyone who insists on devoting his or her life to something as patently impractical as creating art objects, images or conceptual experiences, had better be prepared for a long, hard slog. To devote oneself to such an enterprise is a luxury, and like all luxuries, it comes at a stiff price. The best advice I ever heard for aspiring artists was spoken to me last year by Oregon-based artist Tom Cramer, whom I was profiling for Portland’s alternative weekly, Willamette Week. “Learn to live cheaply and be poor,” he said. “Don’t think of art as a career; think of it as a lifestyle.”