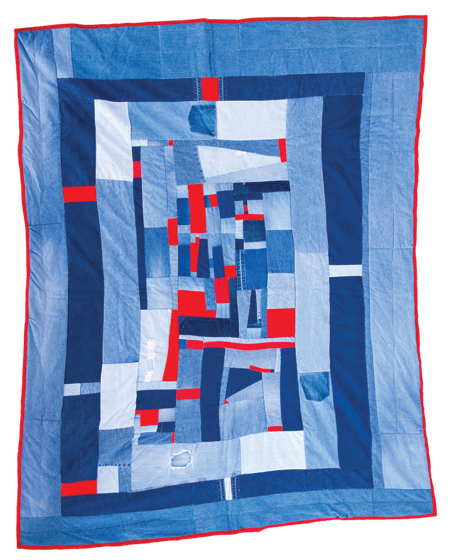 A mature artist, Loretta Bennett is nevertheless considered a "new" generation quilter. But when it comes to the quilting community of Gee's Bend, Alabama, Bennett is still a spring chicken. Daughter of acclaimed quilter Qunnie Pettway, Bennett made her first quilt, picturing a flower garden, at age 12. "It was a five-cornered quilt made from my mother's discarded pieces. It took me all that summer and then some."

Bennett's practice is part of a quilting tradition that has continued uninterrupted for five generations, and, because many members of the predominantly female community are descendants of slaves, quite possibly longer. Gee's Bend, in Wilcox County, is part of the Black Belt--a narrow peninsula surrounded by a bend in the Alabama River whose name is derived from both the soil and its historically all African American population. Gee's Bend first gained national attention in the 1960s for the quality of the quilts being produced there. Hailing these works as modern masterpieces, the Museum of Fine Arts Houston organized a traveling exhibition in September 2002, titled "The Quilts of Gee's Bend." When the exhibition arrived at the Whitney Museum of American Art that November, the applause of the New York reviews was deafening.

Like many of the quilters in the Gee's Bend community, Bennett's quilts are strikingly improvisational, with splashy, off-center fragments of cloth often driving the bus. Her large-scale, bold designs, made up of brilliantly colored geometric blocks, are often paired with semi-descriptive titles such as Unfinished House (2008), Broken Housetop (2008), and House Top Out (2009). Is the allusion to home a coincidence? In spite of their gargantuan gallery appeal, many quilts are still fabricated as utilitarian residential objects. Case in point: Vegetation (2009), a massive (92 by 80 inches) quilt whose key lime, pumpkin, and brown swathes recall Alabama's fall foliage was originally created for Bennett's bed.

Bennett, who hand-stitches in the traditional Gee Bend style, breaks out on her own with unusually vibrant colors, inspired in part by national and overseas travels with her husband, who was in the military at the time. Bennett was struck by the use of color used to express different regional interests and cultural symbols. "In the Southwestern US, houses and cars were often very bright, bold colors. Overseas, brilliant colors were apparent in flowers and festival clothing." In her own work, Bennett relies on strong contrasts that spontaneously propel the viewerÕs eye across her broad scope of fabric with all the intensity--and creative restlessness--of a jazz riff.

Now, Bennett is pushing the tradition of quilting one step farther with the introduction of etchings produced through Paulson Press in Berkeley. Bennett creates actual small-scaled, sampler quilts that are subsequently transferred to an etching plate coated with a thin layer of wax and treated with acid to produce prints that accurately capture details normally lost in the printing process: seams, threads, slight variations in color, and folds of fabric. The results are prints that mirror real (albeit much smaller) quilts, and that, like her larger works, give modernist masterpieces a run for their money.

With the notoriety of Gee's Bend and its inhabitants came a revival of quilting in the region. Bennett herself credits the celebrated Houston show of 2002 with opening her eyes. "Even if the young ones don't do it, they know how to do it," says Bennett. After all, "the kids were just expected to sew and quilt. It's what we did before going out to play." Bennett recalls threading and knotting needles for her mother and her mother's fellow quilters at age six. Now, ironically, play and work have become one. When asked how she prepares to quilt, Bennett claims it's all about the music. "I put on some good dancing music, and then I just get going."